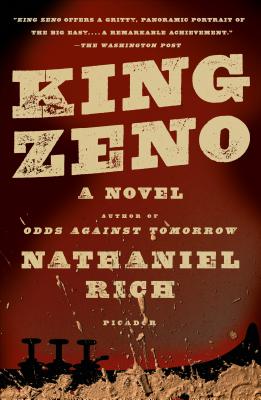 Who doesn't want to read a great historical crime novel about New Orleans? And just in time for Mardi Gras. Rich captures the city in 1918, just after WWI, with its dreams of renewed prosperity, the birth of Jazz, the crackdown on prostitution, and the giant canal that was being constructed in the Ninth Ward to boost employment and commerce. Then, that optimism is challenged by the Spanish flu epidemic, the Mafia, crazed cops, street violence, racism, the canal becoming something of a death-trap, and the ax-wielding serial killer who's on the loose. It's New Orleans, right? This novels is so full of color, suspense, music and classic NOLA characters that ya gotta love it—I did.

Finally, New Orleans has the great novel it deserves. The birth of Jazz, the infamous Axeman murders. the Spanish Influenza epidemic, the social stratification and its undercurrents that have always held sway over the city are all  a part of the story here. Nathaniel Rich delivers a beautiful, haunting tale full of great characters that will linger in your mind just like the fabled music born in the crescent city.

A January Pick by Salon, Town and Country, Southern Living, and LA Magazine

From Nathaniel Rich, one of the most inventive writers of his generation, King Zeno is a historical crime novel and a searching inquiry into man’s dreams of immortality.

Nathaniel Rich is the author of the novels King Zeno, Odds Against Tomorrow, and The Mayor’s Tongue. He is a writer at large for The New York Times Magazine and a regular contributor to The Atlantic and The New York Review of Books. He lives in New Orleans.

"The novel, like a city, somehow coheres, as Rich never loses control of the riotous raw material . . . Rich is a gifted portraitist of his three main characters . . . This is a novel with a high body count, but it has far too much energy ever to feel morbid." —Chris Bachelder, The New York Times Book Review

"A groaning board of tasty literary treats . . . King Zeno offers a gritty, panoramic portrait of the Big Easy . . . Full of sharply rendered characters, gallows humor and finely observed descriptions . . . The fact that Rich comes so close to executing this ambitious literary banquet is in itself a remarkable achievement." —John Michaud, The Washington Post

"Sprawling, yet speedy . . . A rich, contemporary canonization of the Crescent City at the turn of the century.” —Vanity Fair

"Wildly imaginative . . . Stealing the show, though, is the Big Easy, with its distinctive mix of music, race, and history, at a moment when the Spanish Flu and a series of ax murders terrified residents. With an artful blend of humor suspense, and noir, Rich folds facts into a work of fiction that evokes the historical novels of E. L. Doctorow.” —The National Book Review (Hot Book of the Week)

“Has anyone written the Great Novel of New Orleans? If not, Nathaniel Rich’s sprawling, funny, tragic, generous new work, King Zeno, comes close. It reminded this reviewer of John Dos Passos’ U.S.A. trilogy, with its clever melding of real and fictional events, its snippets of newspaper articles and astonishingly memorable characters . . . King Zeno is the New Orleans novel we’ve been waiting for.” —Arlene McKanic, BookPage

“Meticulously timed and plotted . . . Unforgettable characters . . . To read King Zeno is to see the city through Rich’s sharply observant yet loving eyes . . . It takes time to learn a city, to love it, to make a mark on it, and Rich has done that in King Zeno.” —Susan Larson, The Advocate (New Orleans)

"The fates of those characters interweave in a tragic yet funny way to highlight the social and economic disparities in a city attempting to regain its faded glory . . . Rich knows well the city, its people and the racial hierarchies that underpin their life and this story. For his third novel, Rich has written a nicely paced detective thriller, with a twist, propped up by the realities of a society that is racist, yet multicultural in many ways. His offbeat humor and lively writing make King Zeno a good read on both levels." —Chris Smith, Winnipeg Free Press

"Rich brings multiple themes together in this roiling genre-blender set in New Orleans in 1918 . . . It’s a rich gumbo of ingredients, and Rich stirs them effectively, combining a lyrical, impressionistic style with a sure-handed grasp of the historical moment . . . A heady mix of literary thriller and high-end historical fiction." —Booklist

"[King Zeno] excels at immersing the reader in the narrative." –Publishers Weekly

"In this deft historical thriller, Rich . . . seamlessly blends fact with fiction . . .Though [the] story lines do not converge until the climactic final chapter, they are absorbing enough on their own to keep readers engaged. The period details—most taken directly from the historical record—are expertly deployed." —Michael Pucci, Library Journal