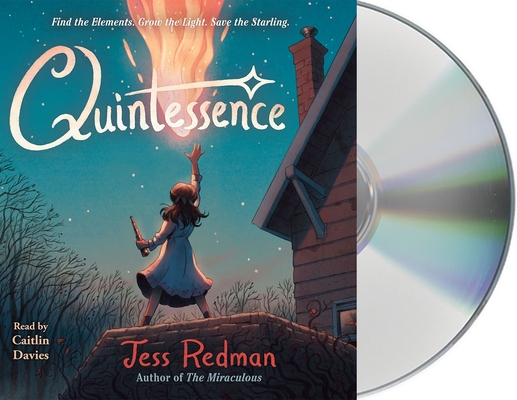 By Jess Redman, Caitlin Davies (Read by)
Email or call for price
Special Order -- Email or Call for Availability

Quintessence is an extraordinary story from Jess Redman about friendship, self-discovery, interconnectedness, and the inexplicable elements that make you you.

Find the Elements. Grow the Light. Save the Starling.

Three months ago, twelve-year-old Alma moved to the town of Four Points. Her panic attacks started a week later, and they haven’t stopped—even though she’s told her parents that they have. She’s homesick and friendless and every day she feels less and less like herself.

But one day she finds a telescope in the town’s junk shop, and through its lens, she watches a star—a star that looks like a child—fall from the sky and into her backyard. Alma knows what it’s like to be lost and afraid, to long for home, and she knows that it’s up to her to save the star. And so, with the help of some unlikely new friends from Astronomy Club, she sets out on a quest that will take a little bit of science, a little bit of magic, and her whole self.

This title has Common Core connections.

A Macmillan Audio production from Farrar, Straus and Giroux

Jess Redman is the author of The Miraculous, Quintessence, and The Adventure is Now. She is a former therapist who currently lives in Florida with her husband, their two young children, and an old cat named Soul Pie.

Caitlin Davies is a New York City-based actor and audiobook narrator. Davies specializes in audiobooks for teens and young adults, including the House of Night series by P.C. Cast and Kristen Cast. She has performed in New York and regional theaters and is a member of the WorkShop Theater Company in New York City. She has a bachelor's degree from Vassar College, and has studied acting at the Eugene O'Neill National Institute, the British American Drama Academy, the Barrow Group, and Brown University/ Trinity Rep.