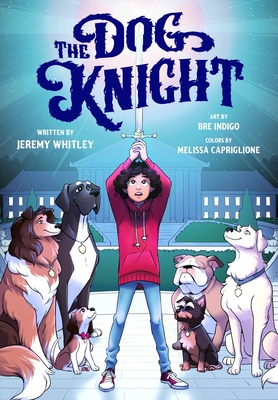 A nonbinary middle schooler saves a dog from bullies and is offered the chance to become the Dog Knight, protector of a magical pact between humans and dogs, in the first book of this humorous and heartwarming middle-grade graphic novel series from Jeremy Whitely, author of Princeless, and Bre Indigo, illustrator of Meg, Jo, Beth, and Amy: A Graphic Novel.

Frankie knows who they are. They’re a drummer, they’re nonbinary, and they’re… the Dog Knight?

One day Frankie is a relatively normal middle schooler, with relatively normal challenges, like finding the perfect outfit to wear during their drum solo during the upcoming band concert. The next, they save a friendly golden retriever from bullies and suddenly find themselves in a giant magical doghouse, with a funny looking helmet, talking to a group of dog superheroes called the Pawtheon about a job offer.

If Frankie can prove that they possess the six dog virtues of loyalty, kindness, honesty, justice, stubbornness, and smell, they will be named the Dog Knight and be given the power to fight alongside the Pawtheon and save the world from the forces of chaos.

Maybe there is more to Frankie than they thought?

Jeremy Whitley is a writer of comic books, books, podcasts, and more living in Durham, North Carolina. He is the creator of the Eisner Nominated and Glyph award winning series "Princeless" as well as it spin-off "Raven the Pirate Princess" and "The School for Extraterrestrial Girls." He has also written several books and comics for Marvel Comics including the critically-acclaimed "The Unstoppable Wasp", "The Future Foundation", "Champions", and "Avengers". He has also written over fifty issues of the "My Little Pony: Friendship is Magic" comic book series.

Bre Indigo, illustrator of the graphic novel Meg, Jo, Beth, and Amy and the online web-comic Jamie, is a black, queer, freelance artist and illustrator based in Orange County, California.