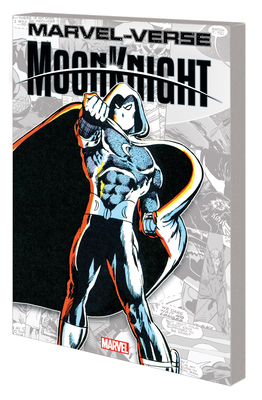 
Backordered -- Email or Call for Availability
With multiple identities, Moon Knight is one of the most mysterious, mixed-up marauders in the Marvel-Verse! Meet Marc Spector as a monster hunter, when the shadowy Committee hires him to track down the Werewolf by Night! Then, join him juggling lives as a millionaire, a mercenary, a cab driver…and a masked vigilante teaming with Daredevil in a battle against the Jester that’s no laughing matter! But is Moon Knight really a bad guy? Find out alongside Spider-Man in a criminal competition played out by the gangs of New York! Then, when time-traveling Kang the Conqueror plots to settle an ancient grudge against the Egyptian god Khonshu, it’s up to Khonshu’s avatar, Moon Knight, to fix the broken timestream!