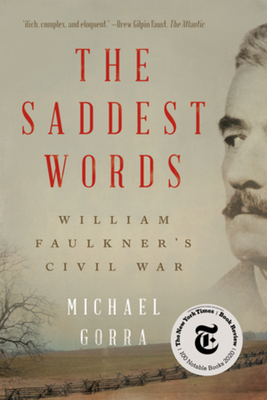 A “timely and essential” (New York Times Book Review) reconsideration of William Faulkner’s life and legacy that vitally asks, “How should we read Faulkner today?”

With this “rich, complex, and eloquent” (Drew Gilpin Faust, Atlantic) work, Pulitzer Prize finalist Michael Gorra charts the evolution of an author through his most cherished—and contested—novels. Given the undeniable echoes of “Lost Cause” romanticism in William Faulkner’s fiction, as well as his depiction of Black characters and Black speech, Gorra argues convincingly that Faulkner demands a sobering reevaluation. Upending previous critical traditions and interweaving biography, literary criticism, and rich travelogue, the widely acclaimed The Saddest Words recontextualizes Faulkner, revealing a civil war within him, while examining the most plangent cultural issues facing American literature today.

Michael Gorra is the Mary Augusta Jordan Professor of English at Smith College, where he has taught since 1985. He is the recipient of fellowships from the National Endowment for the Humanities and the Guggenheim Foundation and, for his work as a reviewer, of the Balakian Award from the National Book Critics Circle. His books include The Saddest Words: William Faulkner’s Civil War; Portrait of a Novel: Henry James and the Making of on American Masterpiece, a finalist for the Pulitzer Prize in Biography; The Bells in Their Silence: Travels through Germany; After Empire: Scott, Naipaul, Rushdie; The English Novel at Mid-Century; and, as editor, The Portable Conrad and the Norton Critical Editions of The Sound and the Fury and The Portrait of a Lady.