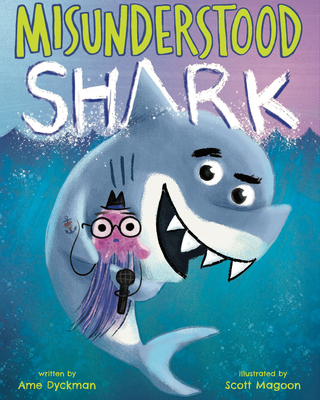 I love this fun new book by two of my favorites. Not only are the illustrations darling and silly, but the story and dialogue are to die for. Just kidding.

Every beachgoer knows that there's nothing more terrifying than a... SHARRRK! But this shark is just misunderstood, or is he? In a wholly original, sidesplittingly funny story, New York Times bestselling author Ame Dyckman and illustrator Scott Magoon take this perennial theme and turn it on its (hammer)head with a brand-new cheeky character.

The filming of an underwater TV show goes awry when the crew gets interrupted by a... SHARRRK! Poor Shark, he wasn't trying to scare them, he's just misunderstood! Then he's accused of trying to eat a fish. Will Shark ever catch a break? After all, he wasn't going to eat the fish, he was just showing it his new tooth! Or was he? Explosively funny, extraordinarily clever, and even full of fun shark facts, this surprisingly endearing story gets to the heart of what it feels like to be misunderstood by the people around you. With a surprise twist ending, our Misunderstood Shark will have kids rolling with laughter!

Ame Dyckman is the award-winning author of picture books Boy + Bot, Tea Party Rules, the New York Times bestselling Wolfie the Bunny, Horrible Bear!, and You Don't Want a Unicorn! Ame lives in central New Jersey with her family, and, of course, the characters from her stories. She's currently building a homemade swimming pool for the protagonist of her upcoming series, Misunderstood Shark -- mostly so she can have her bathtub back.

Scott Magoon grew up in New England, and still lives in Boston with his family. He's an art director, designer, and illustrator, and he loves making books for kids. He's the illustrator of the bestselling Nuts series with author Eric Litwin; Spoon and Chopsticks, both written by Amy Krouse Rosenthal; and I Will Not Eat You by author Adam Lehrhaupt. He's also written and illustrated Breathe and The Boy Who Cried Bigfoot.

"Bob the jellyfish is the host of an underwater TV show, and while taping his latest segment, he's interrupted by a hungry shark chasing a cute fish! Time to panic? Not quite...At every initially terrifying turn, dubious Bob takes the opportunity to share a shark fact and dispel a myth...the over-the-top humor, comical asides from the TV crew, and Magoon's boisterous, candycolored artwork, in thick lines and cartoonish shapes, will lure in many a reader. The sneaky shark facts will go down easy in this uproariously silly picture book." -- Booklist

"Magoon's cartooning is both funny and visually striking as the toothy, scenery-chewing Shark plays to the camera and zips through the green-blue water, barely resisting his primal urges. And the playful typography used for Dyckman's rapid-fire dialogue makes her blooper-reel humor even funnier." -- Publishers Weekly

"A maligned shark steals the show to explain just how wrong his fellow fish are about him in Dyckman and Magoon's debut collaboration...[Dyckman] gives ambiguity the narrative spotlight with well-honed tension prolonging readers' indecision. Meanwhile, Magoon's flair for underwater illustration also allows a shark's redemption and his prey's suspicion to both live on the page. Readers will need to decide for themselves if Shark is really as scary as he seems or if misunderstandings have colored our opinions. Fun and playful...or so Shark would have us believe." -- Kirkus Reviews

NYPL 100 Titles for Reading and Sharing

* "Interspecies adoption puts a fresh spin on the new-baby theme... A treat of a picture book." -- The Horn Book, starred review

* "Dyckman's (Boy and Bot) and Campbell's (Flora and Ulysses) story is like a pretty petit four with an unexpectedly zingy filling." -- Publishers Weekly, starred review

NYPL's 100 Titles for Reading and Sharing

* "Dyckman's debut offers pitch-perfect pacing and gentle humor... As Boy and Bot would say, it's 'affirmative' that this book will be a hit." -- Kirkus Reviews, starred review


Praise for Scott Magoon's I Will Not Eat You:

"The full-bleed illustrations are saturated with rich, dark colors but manage never to be scary. With several humorous twists, lots of imaginative play, and illustrations reminiscent of Maurice Sendak's in Where the Wild Things Are, this is a surefire read-aloud hit. VERDICT Highly recommended for storytime and one-on-one sharing." -- School Library Journal

* "Magoon's digital art captures the colors and crisp, airy light of the Arctic setting; cartoon lines and wide eyes present creatures above and under the ice as friendly, rounded and smiling... Richly composed and sweetly appealing -- just right for baby storytimes as well as one-to-one sharing." -- Kirkus Reviews, starred review