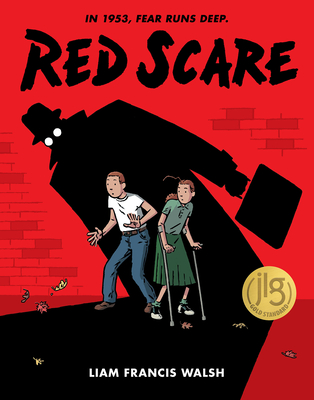 
Usually Arrives in Store in 1-5 Days
A page-turning sci-fi adventure set in 1953, featuring a clever girl who, against all odds, must outsmart bullies, the FBI, and alien invaders during the height of the communist Red Scare.

Peggy is scared: She's struggling to recover from polio and needs crutches to walk, and she and her neighbors are worried about the rumors of Communist spies doing bad things. On top of all that, Peggy has a hard time at school, and gets taunted by her classmates. When she finds a mysterious artifact that gives her the ability to fly, she thinks it's the solution to all her problems. But if Peggy wants to keep it, she'll have to overcome bullies, outsmart FBI agents, and escape from some very strange spies!

Liam Francis Walsh is an award-winning cartoonist, writer, and illustrator. He was born in northern Wisconsin and grew up on a dairy farm with lots of siblings and books and a pet crow. His work has appeared in the New Yorker, the Guardian, and Reader's Digest, and he is the author of two pictures books, Make a Wish, Henry Bear and Fish. He lives in Switzerland with his wife and daughter.

"Red Scare recounts a harrowing chapter in our country's history when the fear of Communism, or the fear of being thought a Communist, caused a sort of mass insanity. Walsh's storytelling skills are superb and the drawings are even better." ---- Roz Chast, author of Can’t We Talk About Something More Pleasant?, which won a National Book Critics Circle Award and was shortlisted for a National Book Award.

"I love the drawings: Sometimes you turn the page and your jaw drops. The artwork builds this page-turner perfectly!" -- Jeff Smith, New York Times bestselling author of the BONE series