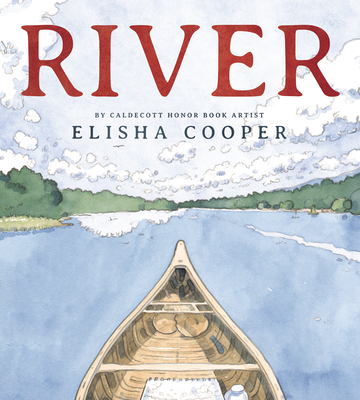 Caldecott Honor winner Elisha Cooper invites readers to grab their oars and board a canoe down a river exploration filled with adventure and beauty.
In Cooper's flowing prose and stunning watercolor scenes, readers can follow a traveler's trek down the Hudson River as she and her canoe explore the wildlife, flora and fauna, and urban landscape at the river's edge. Through perilous weather and river rushes, the canoe and her captain survive and maneuver their way down the river back home.

River is an outstanding introduction to seeing the world through the eyes of a young explorer and a great picture book for the STEAM curriculum.

Maps and information about the Hudson River and famous landmarks are included in the back of the book.

Elisha Cooper is the award-winning author of Train, which received five starred reviews; Farm, which received starred reviews in Horn Book Magazine and Publishers Weekly; and Beach, which won the 2006 Society of Illustrators Gold Medal. Other picture books include A Good Night Walk, Magic Thinks Big, and Dance!, a New York Times Best Illustrated Book of the Year. Elisha Cooper lives with his family in New York City. For more information, go to elishacooper.com.

"This stunningly illustrated account of a woman's solo canoe trip down the Hudson is a remarkable example of the art of the picture book... Cooper's oversize gem is for the ages, and for people of all ages." -- The New York Times

* "At the conclusion of this beautiful book, readers will feel they have traveled a journey themselves... Expansive content impressively and beautifully presented." -- Kirkus Reviews, starred review

* "Evocative... An author's note, sources, and information about the river round out this beautiful book." -- Booklist, starred review

* "Cooper's quiet, fluid present-tense prose is perfectly suited to the rhythm of a river... Let the armchair travel commence!" -- Bulletin of the Center for Children's Books, starred review

* "Cooper's watercolor and pencil sketches [illuminate] the details of the trip with a rhythmic mix of vignettes and wide landscapes." -- The Horn Book, starred review

* "Cooper's gentle tale of the loss of a feline friend is perfect bibliotherapy for those who have lost a loved pet." -- Kirkus Reviews, starred review

* "Kids won't have to be cat lovers to find this endearing and quietly reassuring, while young cat owners will want to tell the tale of their own feline friends." -- Bulletin of the Center for Children's Books, starred review

* "A gentle, loving look at the life cycle of pets; young readers will be able to gain confidence in retelling the story using the text and the pictures." -- School Library Journal, starred review

* "Cooper's thick black lines produce figures full of kinetic energy and personality. The circular nature of the story is beautifully reinforced by the repetition in both art and text, and the result is at once realistic and comforting." -- The Horn Book, starred review


Praise for 8: An Animal Alphabet:

* "Illustrated with joy, this is an alphabet book to pore over, worth adding to any collection." -- School Library Journal, starred review

* "A skillfull blending of counting and matching elements into an animal-themed abecedary." -- Publishers Weekly, starred review

* "It's as thorough and pleasing an introduction to a farm as one could ask of a picture book." -- The Horn Book Magazine, starred review

"Cooper's portrayal of a day at the shore is generous with such minutiae; his fondness for his subject is evident and infectious." -- School Library Journal