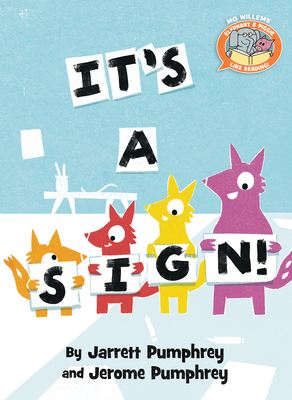 
On Our Shelves Now
One, Two, Kat, and Four are starting a club, and every member is good at something! Except naming clubs.


If only there were some kind of sign about what their club should be called!
Jarrett & Jerome Pumphrey are brothers and award-winning authors and illustrators. Their books include Somewhere in the Bayou, The Old Boat, and their author-illustrator debut, The Old Truck, which received the Ezra Jack Keats New Author Honor, was named a Best Book of the Year by Publishers Weekly, and garnered a host of other accolades. The brothers have been making club signs together ever since their very first club, which they were forced to start with their two other brothers: the Mom-Said-Either-We’re-All-In-The-Club-Or-There’s-No-Club Club. Jarrett lives with his family in Austin, Texas. Jerome lives with his family in Clearwater, Florida. (All the brothers are still in the club.)

Mo Willems is a number one New York Times best-selling author and illustrator. He has been awarded a Caldecott Honor on three occasions, for Don’t Let the Pigeon Drive the Bus!, Knuffle Bunny: A Cautionary Tale, and Knuffle Bunny Too: A Case of Mistaken Identity. He has won two Theodor Seuss Geisel Medals and five Geisel Honors for his celebrated Elephant & Piggie series. Mo began his career as a writer and animator on Sesame Street, where he garnered six Emmy Awards. He lives with his family in Massachusetts.
"[A]n all-dialogue early reader that cleverly builds on a concept while tapping into readers’ passion for categorization. Foam-stamped, digitally finished illustrations, set against minimalist backgrounds, introduce four critters of varying size and color . . . Welcoming and unabashedly appreciative of each other’s talents—and new readers’ needs—the critters model the kind of club that anyone would be happy to join."
—Publishers Weekly (starred review)

"[A]n engaging read . . . If you find yourself giggling at this goofy story, join the club."
—Kirkus Reviews