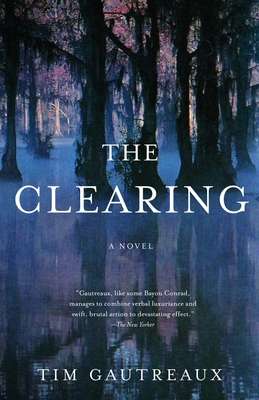 In his critically acclaimed new novel, Tim Gautreaux fashions a classic and unforgettable tale of two brothers struggling in a hostile world.
In a lumber camp in the Louisiana cypress forest, a world of mud and stifling heat where men labor under back-breaking conditions, the Aldridge brothers try to repair a broken bond. Randolph Aldridge is the mill’s manager, sent by his father—the mill owner—to reform both the damaged mill and his damaged older brother. Byron Aldridge is the mill's lawman, a shell-shocked World War I veteran given to stunned silences and sudden explosions of violence that make him a mystery to Randolph and a danger to himself. Deep in the swamp, in this place of water moccasins, whiskey, and wild card games, these brothers become embroiled in a lethal feud with a powerful gangster. In a tale full of raw emotion as supple as a saw blade, The Clearing is a mesmerizing journey into the trials that define men’s souls.

Born and raised in Louisiana, Tim Gautreaux is Writer-in-Residence at Southeastern Louisiana University. His work has appeared in Harper's, The Atlantic Monthly, GQ, and Zoetrope, as well as the O. Henry and Best American short-story annuals. His first novel, The Next Step in the Dance, won the 1999 Southeastern Booksellers Award, and he has also published two collections of short fiction.

“Gautreaux, like some Bayou Conrad, manages to combine verbal luxuriance and swift, brutal action to devastating effect.” – The New Yorker

"Offers so many pleasures, from Gautreaux’s confident prose—a wonderful mix of the tangible and metaphorical—to its . . . accomplished storytelling." —The New York Times Book Review

“A book of sinew and style.” —The Boston Globe

“Reading Tim Gautreaux's marvelous second novel, The Clearing, is like immersing yourself in a film during daylight hours, losing complete track of time. When you emerge from the theater, blinking and stunned by the sunshine, you're unwilling and unready to resume your normal life. You don't want the story to end.” —Los Angeles Times

“A compelling look at one man and his family, barely alive but deeply human. In him, it is not hard to recognize ourselves.” –San Francisco Chronicle

"A postmodern masterpiece. . . . Gautreaux has created, out of antique characters and a 1923 Louisiana backwater, a parable about coping with modernity. About us. And he reminds us that great writing is a timeless art." –The Miami Herald

“The Clearing is his very best yet, and to say that of Tim Gautreaux's writing is to say something is very fine indeed. . . . . Wit, wisdom and heart are all combined in perfect proportion in this astonishing and unforgettable novel.” –The Times-Picayune

“Tim Gautreaux's The Clearing presents the reader with an interesting dilemma: do you give in to the stifling suspense and read quickly, to find out what happens to the novel's vivid characters, or do you go slow, savoring each delicious sentence, and thereby risking, by the climax, a nervous breakdown?” –Richard Russo, author of Empire Falls

"Inventive, carefully conveyed and energetic. . . . Tim Gautreaux has written a somber, serious, historical novel that assures us all that he is a rising force in fiction." –Chicago Tribune

“There's a terrible beauty to the novel. . . . It stands up well in comparisons with Cold Mountain, Charles Frazier's Civil War bestseller. Word for word, it's my favorite novel so far this year.” –Bob Minzesheimer, USA Today

“Gautreaux unfolds a story of love and lawlessness against a backdrop of swamp so vivid that it will have you checking the floor for coiled-up water moccasins.” –Milwaukee Journal Sentinel

"A haunted and heartbreaking portrait of 1920s Louisiana. . . . Gautreaux has emerged as one of our most graceful writers, an openhearted explorer of life's tiny beauties." –Esquire

“A fine and exciting novel . . . Tim Gautreaux is a literary writer unafraid to tell a brisk and jolting story that keeps the pages turning.” –Charles Frazier, author of Cold Mountain

"An astonishingly good novel, impressively and convincingly situated both in time and locale. . . . The way the author weaves music organically through this tale of redemption is yet another remarkable artistic and human achievement of The Clearing." –St. Louis Post-Dispatch

“Gautreaux is a master at painting the swampy backwaters of 80 years ago, as well as the people struggling to survive there. His characters are all too human at best, and at worst as poisonous as a water moccasin; but like fine wood, there is still good grain in many of them.” –Fort Worth Star Telegram

“At once tender and unrelentingly exciting. There are enough ghastly creatures slithering through this swamp to hold anyone's interest, and enough moral insight to enlighten anyone's conscience.” –The Christian Science Monitor

"Set in backwoods Louisiana after the first World War, this taut and unsettling novel . . . uses prose as rich and teeming as the swamps he brings to life." –The Baltimore Sun

“As a reader passes through the contagion of violence within this story, what is remembered are the tendrils of compassion and tenderness, small but enduring. Tim Gautreaux is a wonderful writer, and The Clearing is a unique and fascinating story.
–Rick Bass, author of The Hermit’s Story

“You can cut the atmosphere with a knife . . . exotic and electric.” –Denver Post

“I have long been an avid admirer of Tim Gautreaux, but after reading The Clearing I came to a rare and notable state of mind as a reader. Hereafter, as with Mississippi and Faulkner, Northern California and Steinbeck, Georgia and O’Connor, when I think of Louisiana, I will hear the voice of Tim Gautreaux. He has for me become an enduring presence not just in the world of books but in the American landscape." –Robert Olen Butler, author of A Good Scent From a Strange Mountain

“A dense, masterfully written story of filial ties and a struggle for decency and redemption in a heart of darkness. . . . The tale is imbued with such delicacy and even beauty that it not only affects but astonishes.” –Entertainment Weekly

"Gautreaux . . . writes like a man who's good with his hands. His efficient prose is meticulously crafted with a carpenter's pride and infused with a visual clarity that becomes almost visceral." –San Antonio Express News

“Tim Gautreaux writes what he knows: a South so deep and dark that [its] people and places . . . take on an exotic sheen.” –Boston Phoenix

"Not many writers can put you into a scene with more exactness than Gautreaux. . . . The Clearing crept up and startled me with a mastery evident from the first page.” –Charles Matthews, San Jose Mercury News

“This dark story, told in the clearest prose, compels you forward like a handcar on a downhill slope, until the final escape. With The Clearing, Tim Gautreaux makes himself a clearing on the shelf of books you have to keep. You read it in wonder.” –Kent Haruf, author of Plainsong