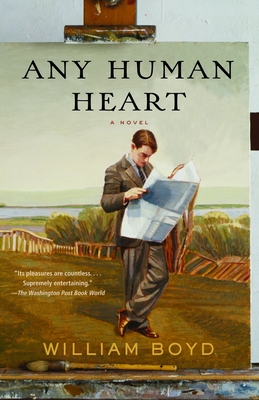 Morgenstern weaves a beautiful tale of opposing yet complementary forces. The Night Circus serves as a stage to a fantastical chess match and love letter between two young conjurers. The prose builds a world of possibility that you won't want to leave.

Simply put, this book is extraordinary. Told in the form of journal entries, it is the story of Logan Mountstuart (1906 - 1991). Boyd artfully weaves the major events of the 20th Century with the life events of his fictional character. Fans of Julian Barnes, Henry James, and Downton Abbey will be right at home.

William Boyd was born in Accra, Ghana, and attended University in Nice, Glasgow, and Oxford. He is the author of seven novels and eleven screenplays, and has been the recipient of several awards, including the Whitbread Award for Best First Novel, the John Llewellyn Rhys Prize, the James Tait Black Memorial Prize and the Los Angeles Times Book Prize for Fiction. Boyd lives with his wife in London and southwest France.

"Boyd has an exceptional ability to tell a really compelling story, in dense imaginative detail, about characters with complex, and convincing, emotional lives. . . . I've already read this book twice and probably shall again. Of how many novels can that be said?"--Peter Green, Los Angeles Times Book Review

“The sort of rare novel that redeems the essential purpose of prose fiction. . . . A high celebration of the plain fun of a life lived with relentless appetite and reasonable grace.”—The Baltimore Sun

“Entertaining and moving. . . . Can be read with sheer pleasure not only for the delicacy of its emotions but for the truth of its perceptions. Like saying goodbye to a good friend, it’s hard to see this brilliant novel come to an end.” —The Pittsburgh Post-Gazette

“A wonderful character—and a wonderful book. . . . Boyd persuades you that you’ve read the confidences of a real, flawed, marginal character battered by every malice and caprice of 20th-century history. ” —The Seattle Times

“A pleasure front to back, and a fond tip of the bowler hat to the upper-class fiction spawned by a long-gone world.”— Newsweek

“One of the most skillful and appealing writers at work today.”—The Atlantic Monthly

“A novel of deep humanity and insight.”—Newsday