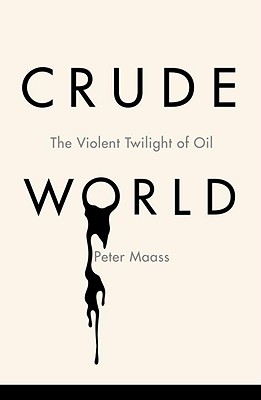 A stunning and revealing examination of oil's indelible impact on the countries that produce it and the people who possess it.

Every unhappy oil-producing nation is unhappy in its own way, but all are touched by the "resource curse"—the power of oil to exacerbate existing problems and create new ones. In Crude World, Peter Maass presents a vivid portrait of the troubled world oil has created. He takes us to Saudi Arabia, where officials deflect inquiries about the amount of petroleum remaining in the country's largest reservoir; to Equatorial Guinea, where two tennis courts grace an oil-rich dictator's estate but bandages and aspirin are a hospital's only supplies; and to Venezuela, where Hugo Chávez's campaign to redistribute oil wealth creates new economic and political crises.

Maass, a New York Times Magazine writer, also introduces us to Iraqi oilmen trying to rebuild their industry after the invasion of 2003, an American lawyer leading Ecuadorians in an unprecedented lawsuit against Chevron, a Russian oil billionaire imprisoned for his defiance of Vladimir Putin's leadership, and Nigerian villagers whose livelihoods are destroyed by the discovery of oil. Rebels, royalty, middlemen, environmentalists, indigenous activists, CEOs—their stories, deftly and sensitively presented, tell the larger story of oil in our time.

Crude World is a startling and essential account of the consequences of our addiction to oil.

Peter Maass is a contributing writer to "The New York Times Magazine" and has reported from the Middle East, Asia, South America and Africa. He has written as well for "The New Yorker," "The Atlantic Monthly," " The Washington Post "and "Slate." Maass is the author of" Love Thy Neighbor: A Story of War," which chronicled the Bosnian war and won prizes from the Overseas Press Club and the" Los Angeles Times." He lives in New York City.

“Peter Maass takes a fascinating, nightmarish journey to the far end of the pipeline. If you want to know the true cost of America's oil addiction—and if even you don't—you should read this book.”
-Elizabeth Kolbert

“With the clarity of a hard-boiled investigator and the grace of a fine writer, Peter Maass reveals how oil has cursed the countries that possess it, corrupted those who want it, and wrought havoc on a world addicted to it.  Brilliant and compelling.”
-Robert B. Reich

“Crude World gets its energy from Peter Maass’s exhaustive investigation and first-hand experience and results in an illuminating narrative of the true impact of the global dependence on oil. His engaging historic perspective brings clarity to what should come next.  This book is essential reading for these times and for anyone interested in making the right decisions about our energy future."
-Robert Redford

“Getting off oil is a great idea for a lot of reasons, like saving the planet's climate. But Peter Maass gives us another set of bonuses. If you think drug dealing is a dirty business, then meet the biggest drug of all.”
-Bill McKibben

“Impressively well informed . . . Maass is a keen observer, a fine storyteller and forceful writer, and his book is a readable gem for anyone seeking a primer on the history of oil and its geopolitical ramifications.”
-Adam Lashinsky, San Francisco Chronicle

“Perpetually informative . . . Maass’s book is in a class by itself, as he constructs his relentless indictment on a foundation of first-rate reporting and superb writing.”
-Steve Weinberg, USA Today

“Maass inserts himself into the story, teases out its human drama and does not shy from issuing a personal verdict. This can be tricky territory; not every first-person journalist emerges with his credibility intact. But Maass, whose judgments are always informed by the historical record, extensive interviews and time on the ground, pulls it off.”
-Mark Sorkin, The Nation

“Riveting . . . What journalists like Maass do best is dig beneath all the nation-building plans, appeals to the national interest and professions of selflessness on the part of politicians and investors.”
-Robert Vitalis, London Review of Books

“A lucid account that places readers in the big picture . . . [Peter Maass’s] truths are painful and unavoidable . . . Maass may . . . be a hero; he has written a very brave book.”
-Dan Dervin, Fredericksburg Free Lance-Star

“Maass is a disciplined reporter and crafts a fine tale. Crude World is a chilling read—excellent and informative along the way.”
-Arthur Jones, Energy Metro Desk