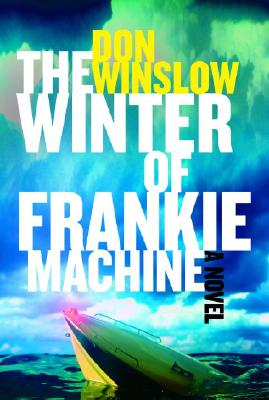 The author of The Death and Life of Bobby Z. and The Power of the Dog now gives us a fierce and funny new novel—and a blistering new take on the Mafia story.

Frank Machianno is a late-middle-aged ex–surf bum who runs a bait shack on the San Diego waterfront when he’s not juggling any of his other three part-time jobs or trying to get a quick set in on his longboard. He’s a stand-up businessman, a devoted father to his daughter, and a beloved fixture in the community.

Frank’s also a hit man. Specifically: a retired hit man. Back in the day, when he was one of the most feared members of the West Coast Mafia, he was known as Frankie Machine. Years ago Frank consigned his Mob ties to the past, which is where he wants them to stay. But a favor being called in now by the local boss is one Frank can’t refuse, and soon he’s sucked back into the treacherous currents of his former life. Someone from the past wants him dead. He has to figure out who, and why, and he has to do it fast.

The problem is that the list of candidates is about the size of his local phone book and Frank’s rapidly running out of time.

And then things go really bad.

Don Winslow is a former private investigator and consultant. He lives in California.

“[A] gripping thriller . . . Like his book’s central figure, Mr. Winslow is good at what he does.”
–Tom Nolan, Wall Street Journal

“Meet Frank Machianno–lover of women, military marksman, reluctant button man for the San Diego mob, and one of the most delightful characters I've run across lately. The Winter of Frankie Machine is a large caliber, heavy charge, high velocity novel. Read it and flinch–then grin.”
–T. Jefferson Parker, author of The Fallen

“Mobbed up, tricked out, and driven by clean, high-octane prose, Frankie Machine moves with the smooth, dark power of a Wise Guy’s vintage Caddy. This book smokes.”
–Dan Fesperman, author of The Prisoner of Guantánamo

“What a smooth, compelling read. Informed, witty, honest and true. Frankie Machine saunters right off the page, as adroit making marinara sauce as dealing mayhem. We should all be in such good hands.”
–Robert Ferrigno, author of Prayers for the Assassin

"The Winter of Frankie Machine is vintage Don Winslow.  Smart and fast, funny and surprisingly touching, this is that rare book that you read more slowly as you go along because you're having such a good time you don't want it to end.
–S.J. Rozan, author of Absent Friends

“Elmore Leonard fans who have not yet discovered Winslow will be delighted by his fourth thriller . . . Winslow has created plausible characters and taut scenes of suspense that will keep readers turning pages.
–Publishers Weekly

“Nobody in the world does this stuff better than Don Winslow . . . another instant classic.”
–Lee Child

“The Winter of Frankie Machine is the ultimate verdict on the Mafia: poetic, brutal, mesmerizing, and full of sheer artistry. I devoured it.”
–Ken Bruen, author of The Killing of the Tinkers

“A hot new one from the emerging master of the hip whipcord thriller. More than ever, a superb brew of milieu, deft characterization, wild suspense.”
–James Ellroy