Sin in the Second City: Madams, Ministers, Playboys, and the Battle for America's Soul (Compact Disc) 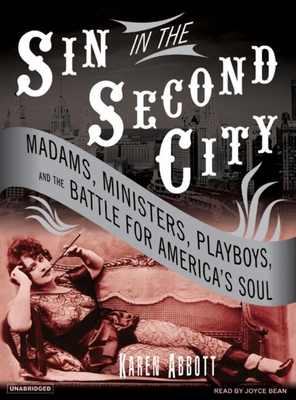 Sin in the Second City: Madams, Ministers, Playboys, and the Battle for America's Soul (Compact Disc)


Email or call for price.
Step into the perfumed parlors of the Everleigh Club, the most famous brothel in American history--and the catalyst for a culture war that rocked the nation. Operating in Chicago's notorious Levee district at the dawn of the twentieth century, the club's proprietors, two aristocratic sisters named Minna and Ada Everleigh, welcomed moguls and actors, senators and athletes, foreign dignitaries and literary icons, into their stately double mansion, where thirty stunning Everleigh "butterflies" awaited their arrival. Courtesans named Doll, Suzy Poon Tang, and Brick Top devoured raw meat to the delight of Prince Henry of Prussia and recited poetry for Theodore Dreiser. Whereas lesser madams pocketed most of a harlot's earnings and kept a "whipper" on staff to mete out discipline, the Everleighs made sure their girls dined on gourmet food, were examined by an honest physician, and were even tutored in the literature of Balzac. Not everyone appreciated the sisters' attempts to elevate the industry. Rival Levee madams hatched numerous schemes to ruin the Everleighs, including an attempt to frame them for the death of department store heir Marshall Field, Jr. But the sisters' most daunting foes were the Progressive Era reformers, who sent the entire country into a frenzy with lurid tales of "white slavery"--the allegedly rampant practice of kidnapping young girls and forcing them into brothels. This furor shaped America's sexual culture and had repercussions all the way to the White House. With a cast of characters that includes Jack Johnson, John Barrymore, John D. Rockefeller, Jr., William Howard Taft, "Hinky Dink" Kenna, and Al Capone, Sin in the Second City is Karen Abbott's colorful, nuanced portrait of the iconic Everleigh sisters, their world-famous club, and the perennial clash between our nation's hedonistic impulses and Puritanical roots. Culminating in a dramatic last stand between brothel keepers and crusading reformers, Sin in the Second City offers a vivid snapshot of America's journey from Victorian-era propriety to twentieth-century modernity.
Karen Abbott is a journalist who has been a staff member of "Philadelphia" magazine and "Philadelphia Weekly."

Joyce Bean is an accomplished audiobook narrator and director. In addition to being an "AudioFile" Earphones Award winner, she has been nominated multiple times for a prestigious Audie Award, including for "Good-bye and Amen" by Beth Gutcheon.

"Sin in the Second City is a masterful history lesson, a harrowing biography, and---best of all---a superfun read. I can't recommend this book loudly enough.” ---Darin Strauss, author of Chang and Eng"