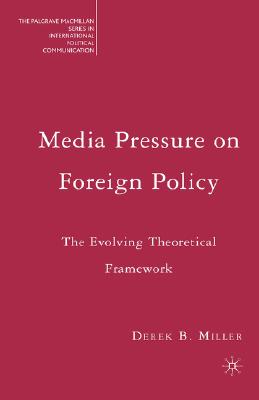 This study offers an explicit theory of media pressure - what it is, how it works, how it can be measured - based in part on the 'positioning theory' in discursive psychology. This offers the first independent and comparative history and analysis of media pressure vs. coverage, through the lens of the insurrection against Saddam Hussein in 1991.

"Derek Miller offers an original and compelling argument for greater intellectual cross-fertilization among political communication theorists, on the one hand, and international affairs scholars, particularly those working in the constructionist approach, on the other.  Not afraid to offer impressively original and unorthodox ideas, Miller takes the reader on an erudite review of great European political philosophers and how they can contribute to a modern understanding of media and political pressure.  He has written a thoroughly enjoyable and stimulating book."
--Steven Livingston, Professor, School of Media and Public Affairs, The George Washington University

"This fascinating book opens up quite new directions in the study of key political processes. Focusing on the alleged influence that the media are supposed to exercise on the political process, Derek Miller brings two novel sets of considerations to bear. Turning to the history of discussions of media influence he brings to light the profundity of discussions of this very issue in the period during which the Western democratic tradition was being forged. Perhaps more importantly he asks the fundamental question: how could the media influence the political process? To answer this question he makes use of one of the most recent developments in social psychology, positioning theory. This is an original and powerful study, and deserves to be very widely read."
--Rom Harré, Psychology Department, Georgetown University, Washington DC and Linacre College, Oxford