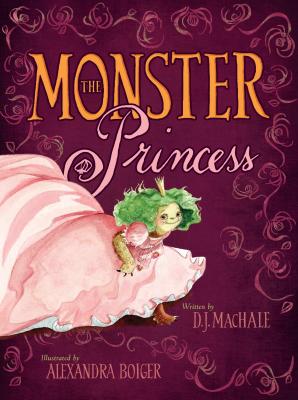 
Usually Arrives in Store in 1-5 Days
Lala dwells in a cave that lies deep below the ground, worlds away from the castle where three beautiful princesses live. She is the best krinkle-nut digger by far, but she longs for more: the dresses, the parties, the royal life. Up, up, up Lala climbs and sneaks into the castle. She tries on the princesses’ gowns…and is caught. But the princesses dress Lala up and let her attend a ball. She stumbles. She bumbles. She is laughed at. Can Lala find it in her heart to forgive the girls who tricked her? Will Lala find out what it means to be a real princess?
D.J. MacHale is the author of the #1 New York Times bestselling Pendragon series and the Morpheus Road series. He has written, directed and produced many television series and movies for young people that have been seen on Nickelodeon, The Disney Channel, HBO, Showtime, PBS, Discovery Kids, and the broadcast networks. D.J. lives with his family in Southern California.

Alexandra Boiger is the illustrator of numerous children’s books, including the #1 New York Times bestseller She Persisted by Chelsea Clinton and The Little Bit Scary People by Emily Jenkins. Ms. Boiger lives in Northern California with her husband and daughter. Visit her at AlexandraBoiger.com.
"Boiger's pastel paintings play up the contrast between the princesses' charmed existence and Lala's comfy borrow, and [MacHale] . . . delivers his message about handling mean girls with sincerity."—Publishers Weekly

"Lala's fluffy green hair, eager grin accented by two delicate fangs, and irrepressible spirit make her a creature kids will root for, even before she uses her monstery skills to save the princesses from a scary beast."—Booklist