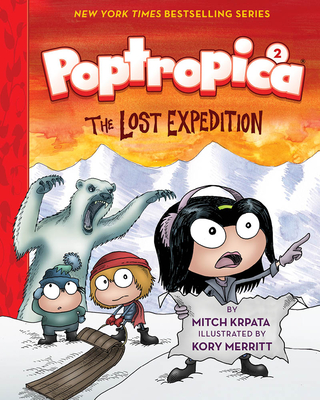 By Kory Merritt (Illustrator), Mitch Krpata, Jeff Kinney (From an idea by)


Backordered -- Email or Call for Availability
Based on a concept by New York Times bestselling Diary of a Wimpy Kid author Jeff Kinney comes Poptropica, a brand-new graphic-novel series by Mitch Krpata and Kory Merritt that takes readers on an adventure beyond the incredibly popular online role-playing world. In book two, The Lost Expedition, Oliver, Mya, and Jorge continue their search for home, with a few hilarious stops along the way. As the friends set sail for new sights, they find the evil Octavian is still hot on their trail, and he’s determined to get his hands on their magical map. To make matters worse, a mysterious organization is keen on expelling the three friends from Poptropica. As the pals travel, they find that each island is filled with its own unique brand of peril, and the mystery surrounding the map and Poptropica itself begins to unfold. Will our trio be able to once again outfox Octavian and discover the identity of this secret society?

Presented in vivid full-color comic book illustrations, The Lost Expedition is perfect for kids who love a sense of adventure while learning about history in a fun way. Book one in the series, The Mystery of the Map, received incredible praise. KirkusReviews said, “Bright, animated colors and zippy cartoonlike action make for an easily accessible first offering that provides just enough exposition to hook young readers and keep them seeking out subsequent adventures. A peppily paced adventure yarn sure to delight fans of the franchise, both old and new.” And Booklist raved, “Based on the online role-playing game developed by the ever-popular Jeff Kinney, this new adventure comic series gets off to a flying start . . . The lively art mirrors that on the website, featuring bold, colorful panels and characters with giant heads and expressive eyes. Fans of the online game will delight in reading a story about one of Poptropica’s many islands, and newcomers will have no trouble falling into this adventure.”

Kory Merritt is the co-creator of Poptropica comics and the author/illustrator of the weekly comic strip Brockport, the online comic The Lost Side of Suburbia, and The Dreadful Fate of Jonathan York. He lives in Spencerport, New York.

Mitch Krpata is a writer and producer for the Poptropica website and the author of the Island Creator Kit. He lives in Boston.

Jeff Kinney is the #1 USA Today, New York Times, and Wall Street Journal bestselling author of the Diary of a Wimpy Kid series and a six-time Nickelodeon Kids’ Choice Award winner for Favorite Book. The Meltdown, book 13, was published in October 2018, and was a #1 bestselling book. His latest book, Diary of an Awesome Friendly Kid: Rowley Jefferson’s Journal, was published in April 2019. Jeff has been named one of Time magazine’s 100 Most Influential People in the World. He is also the creator of Poptropica, which was named one of Time’s 50 Best Websites. He spent his childhood in the Washington, D.C., area and moved to New England in 1995. Jeff lives with his wife and two sons in Massachusetts, where they own a bookstore, An Unlikely Story.
"Fans of the first volume and/or the online game will be excited to see this on the shelf."
— Booklist