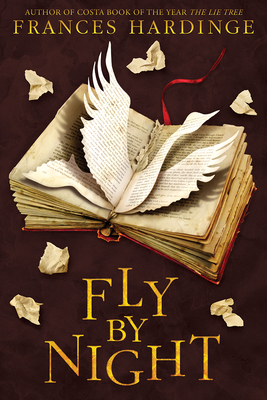 
Email or call for price.
Discover a world where words have untold power in this thrilling fantasy adventure from award-winning author Frances Hardinge

Everybody knew that books were dangerous. Read the wrong book, it was said, and the words crawled around your brain on black legs and drove you mad, wicked mad.

Mosca Mye’s father insisted on teaching her to read—even in a world where books are dangerous, regulated things. Eight years later, Quillam Mye died, leaving behind an orphaned daughter with an inauspicious name and an all-consuming hunger for words. Trapped for years in the care of her cruel Uncle Westerly and Aunt Briony, Mosca leaps at the opportunity for escape, though it comes in the form of sneaky swindler Eponymous Clent. As she travels the land with Clent and her pet goose, Saracen, Mosca begins to discover complicated truths about the world she inhabits and the power of words.
Frances Hardinge is the winner of the Costa Book of the Year for The Lie Tree, one of just two young adult novels to win the major UK literary prize. Known for her beautiful use of language, Hardinge has written many critically acclaimed novels, including Cuckoo Song, Gullstruck Island, Fly by Night, Verdigris Deep, and Fly Trap. She lives in England. Visit her at franceshardinge.com.
**STARRED REVIEW**
“Through rich, colorful language and a sure sense of plot and pacing, Hardinge has created a distinctly imaginative world full of engaging characters, robust humor, and true suspense.”
— School Library Journal, starred review