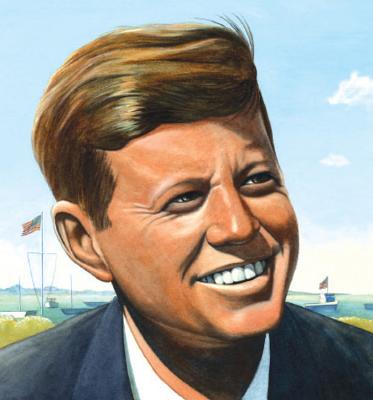 This is book number 3 in the A Big Words Book series.

A moving portrait of a courageous figure by the author of ABE'S HONEST WORDS and MARTIN'S BIG DREAMS.

John F. Kennedy was a popular, charismatic president, beloved by many. But he didn't always believe he had the strength or courage for that office. As a child he was sickly and also overshadowed by his strong, capable, athletic older brother Joe. After Joe Jr.'s death John had to work hard to live up to his own expectations and to those of his father. He overcame pain and self-doubt to see the country through one of the most difficult crises in its history. Doreen Rappaport once again combines real-life quotes with her own lyrical prose to create a moving portrait of a beloved figure. Matt Tavares' stunning artwork vividly depicts this unique time in history.
Doreen Rappaport has written numerous award-winning books for children, including Freedom Ship and The School Is Not White (both illustrated by Curtis James); Martin's Big Words: The Life of Dr. Martin Luther King, Jr., a Caldecott Honor Book and Coretta Scott King Honor Book illustrated by Bryan Collier; and John's Secret Dreams: The Life of John Lennon, also illustrated by Bryan Collier.

Matt Tavares (www.matttaveres.com) is the illustrator several books, including Lady Liberty: A Biography, written by Doreen Rappaport. Matt lives in Ogunquit, Maine with his wife, Sarah, and their two daughters.
“Readers see JFK’s competitive drive both in sports and in his defiance of Khrushchev; his intellectual side as a reader and author; his courage during World War II; and his dedication to service, as a “fill-in” for his dead brother Joe’s political plans and as founder of the Peace Corps. Still, Rappaport refuses to turn this life into a hagiography, citing the disaster of the Cuban Missile Crisis and pointing out Kennedy’s slow progress toward civil rights for African Americans.” —The Horn Book

“This beautifully illustrated and gracefully told story serves as a superior introduction to our 35th president.”—School Library Journal