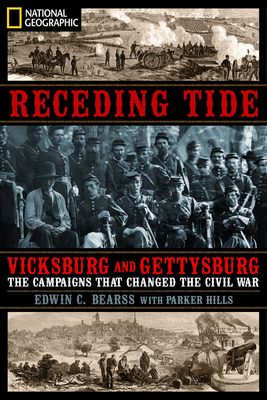 It's a poignant irony in American history that on Independence Day, 1863, not one but two pivotal Civil War battles ended in Union victory, marked the high tide of Confederate military fortune, and ultimately doomed the South's effort at secession. But on July 4, 1863, after six months of siege, Ulysses Grant's Union army finally took Vicksburg and the Confederate west. On the very same day, Robert E. Lee was in Pennsylvania, parrying the threat to Vicksburg with a daring push north to Gettysburg. For two days the battle had raged; on the next, July 4, 1863, Pickett's Charge was thrown back, a magnificently brave but fruitless assault, and the fate of the Confederacy was sealed, though nearly two more years of bitter fighting remained until the war came to an end. In Receding Tide, Edwin Cole Bearss draws from his popular Civil War battlefield tours to chronicle these two widely separated but simultaneous clashes and their dramatic conclusion. As the recognized expert on both Vicksburg and Gettysburg, Bearss tells the fascinating story of this single momentous day in our country's history, offering his readers narratives, maps, illustrations, characteristic wit, dramatic new insights and unerringly intimate knowledge of terrain, tactics, and the colorful personalities of America's citizen soldiers, Northern and Southern alike.

Edwin Cole Bearss is America's premier battlefield historian and the historian emeritus of the National Park Service. Author of 13 books, he has also served as a consultant on numerous documentaries and films, including Ken Burns's The Civil War.

"A smooth narrative of compelling force...Bearss’ experienced eye for human interest stories is evident throughout the book." –Civil War News

“For more than half a century, prolific writer and battlefield historian Bearss has more than covered the Civil War…Here he tells the story of these two important battles…” –Book News