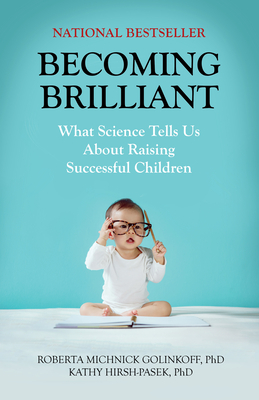 In just a few years, today's children and teens will forge careers that look nothing like those that were available to their parents or grandparents. While the U.S. economy becomes ever more information-driven, our system of education seems stuck on the idea that "content is king," neglecting other skills that 21st century citizens sorely need. Becoming Brilliant offers solutions that parents can implement right now. Backed by the latest scientific evidence and illustrated with examples of what's being done right in schools today, this book introduces the 6Cs--collaboration, communication, content, critical thinking, creative innovation, and confidence--along with ways parents can nurture their children's development in each area.
Roberta Michnick Golinkoff, PhD, obtained her bachelor's degree at Brooklyn College, her PhD at Cornell University, and was awarded a postdoctoral fellowship at the Learning Research and Development Center of the University of Pittsburgh. She is the Unidel H. Rodney Sharp Professor of Education, Professor of Linguistics and Cognitive Science, and Professor of Psychological and Brain Sciences at the University of Delaware. She has won numerous awards for her work, including the John Simon Guggenheim Fellowship, the James McKeen Cattell Sabbatical Award, the Urie Bronfenbrenner Award for Lifetime Contribution to Developmental Psychology in the Service of Science and Society, and two awards from APA: the Award for Distinguished Service to Psychological Science and Distinguished Scientific Lecturer. With her long-standing colleague Kathy Hirsh-Pasek, Dr. Golinkoff was the 2015 recipient of the James McKeen Cattell Fellow Award for lifetime contributions to applied psychological science. She routinely travels worldwide to speak to academic as well as lay groups. Having written more than 150 articles and 16 books, monographs, and special journal issues, she is an expert on language development, playful learning, and early spatial knowledge. Three of her books are directed at parents and practitioners because she is passionate about dissemination. To bring the science of learning to the streets, Dr. Golinkoff cofounded the Ultimate Block Party movement to celebrate the science of learning. Kathy Hirsh-Pasek, PhD, is the Stanley and Debra Lefkowitz Distinguished Faculty Fellow in the Department of Psychology at Temple University and a Senior Fellow at the Brookings Institution. Her research examines the development of early language and literacy, as well as the role of play in learning. With her long-term collaborator, Roberta Michnick Golinkoff, she is the author of 14 books and hundreds of publications. She is the recipient of APA's Urie Bronfenbrenner Award for Lifetime Contribution to Developmental Psychology in the Service of Science and Society, Award for Distinguished Service to Psychological Science, and Distinguished Scientific Lecturer award, as well as the Association for Psychological Science's James McKeen Cattell Fellow Award. Dr. Hirsh-Pasek is a fellow of APA and the American Psychological Society and the president-elect of the International Society for Infant Studies. She has served as the associate editor of Child Development. Her book Einstein Never Used Flashcards: How Children Really Learn and Why They Need to Play More and Memorize Less won the prestigious Books for a Better Life Award as the best psychology book in 2003. Dr. Hirsh-Pasek received her bachelor's degree from the University of Pittsburgh and her PhD from the University of Pennsylvania.