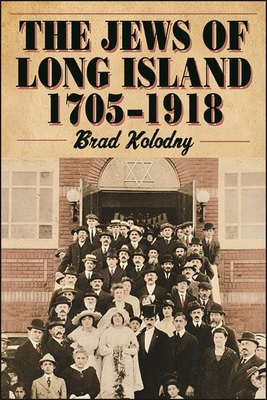 
Usually Arrives in Store in 1-5 Days
In an engaging narrative, The Jews of Long Island tells the story of how Jewish communities were established and developed east of New York City, from Great Neck to Greenport and Cedarhurst to Sag Harbor. Including peddlers, farmers, and factory workers struggling to make a living, as well as successful merchants and even wealthy industrialists like the Guggenheims, Brad Kolodny spent six years researching how, when, and why Jewish families settled and thrived there. Archival material, including census records, newspaper accounts, never-before-published photos, and personal family histories illuminate Jewish life and experiences during these formative years. With over 4,400 names of people who lived in Nassau and Suffolk counties prior to the end of World War I, The Jews of Long Island is a fascinating history of those who laid the foundation for what has become the fourth largest Jewish community in the United States today.
Brad Kolodny is president and founder of the Jewish Historical Society of Long Island and the author of Seeking Sanctuary: 125 Years of Synagogues on Long Island.