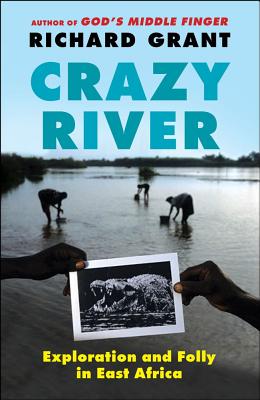 From the acclaimed author of Dispatches From Pluto and Deepest South of All comes a rollicking travelogue from East Africa.

NO ONE TRAVELS QUITE LIKE RICHARD GRANT and, really, no one should. In his last book, the adventure classic God’s Middle Finger, he narrowly escaped death in Mexico’s lawless Sierra Madre. Now, Grant has plunged with his trademark recklessness, wit, and curiosity into East Africa. Setting out to make the first descent of an unexplored river in Tanzania, he gets waylaid in Zanzibar by thieves, whores, and a charismatic former golf pro before crossing the Indian Ocean in a rickety cargo boat. And then the real adventure begins. Known to local tribes as “the river of bad spirits,” the Malagarasi River is a daunting adversary even with a heavily armed Tanzanian crew as travel companions. Dodging bullets, hippos, and crocodiles, Grant finally emerges in war-torn Burundi, where he befriends some ethnic street gangsters and trails a notorious man-eating crocodile known as Gustave. He concludes his journey by interviewing the dictatorial president of Rwanda and visiting the true source of the Nile. Gripping, illuminating, sometimes harrowing, often hilarious, Crazy River is a brilliantly rendered account of a modern-day exploration of Africa, and the unraveling of Grant’s peeled, battered mind as he tries to take it all in.

Richard Grant is an award-winning author, journalist, and television host. He currently writes for Smithsonian magazine, The New York Times, Al Jazeera America, the Telegraph (UK), and several other publications. He grew up in London, England, and now lives in Jackson, Mississippi. His latest book is Dispatches from Pluto, a New York Times bestseller and Winner of the Pat Conroy Southern Book Prize. His previous books are Crazy River, God’s Middle Finger, and American Nomads.

“Armchair explorers, rejoice! Richard Grant has gone where we dare not and brought back the news in all its rich, harrowing and lucid detail. The best book about Africa since Paul Theroux's Dark Star Safari.” --T.C. Boyle, author of The Women and When the Killing’s Done

“Heading for Tanzania, intent on exploration- a first descent of the Malagarasi River-, Richard Grant instead finds himself in the shadow of Burton and Speke, Stanley and Livingston on an altogether unexpected frontier of the unknown- the reality of contemporary Africa. The result is a kaleidoscopic romp through chaos, contradiction, madness and wonder. A fierce account, honestly told, and refreshingly frank.” –Wade Davis, author of One River and Into the Silence

“In his last book when he was being chased by killers in Mexico for a couple days I questioned Richard Grant’s sanity in trying to be the first to travel the length of Tanzania’s Malagarasi River. The hippos and crocodiles are the problem, also the dreadful diseases that daily afflict you. This is a truly wonderful book about East Africa.” –Jim Harrison, author of Returning to Earth

“Way back when, we crawled out of the Great Rift in Africa. Richard Grant explains that this ancient womb is the theater of our future. This coming world will have a lot of people fighting over dwindling piles of junk. This future will looks a lot like murder. This time we are all going down Crazy River and forget the damn life jackets. They belong to the past we devoured. Let Richard Grant take you to your new home. But let me warn you: we will not get home before dark.” —Charles Bowden, author of Murder City

“As he did in God's Middle Finger, Grant takes us into a world where few willingly venture. His feverish journey from Zanzibar, down an uncharted river and into the broken heart of 21st century Africa is by turns funny, poignant, frightening and deeply disturbing. The future Grant shows us with such lucidity and compassion is one his predecessors, Stanley, Livingstone and Burton could never have envisioned.” –John Vaillant, author of The Tiger: A True Story of Vengeance and Survival

Fear and loathing in East Africa as travel writer Grant traverses the ravaged continent in search of a mysterious river and the source of the Nile...Dyspeptic, disturbing and brilliantly realized, Grant’s account of Africa is literally unforgettable." --Kirkus Reviews

"A mixture of offbeat characters and travelogue, an entertaining and informative first-person account of a man who’s very much out of his element but very keen to learn everything he can." --Booklist

"Grant’s gift for getting detoured...makes this one of the year’s most surprising adventure books, taking us well beyond jungle and river..part sociologist, part journalist, and “more interested in what happened along the way than achieving goals or reaching destinations.” --Men's Journal

"This is Grant’s third travel book, and he strikes a wonderful balance between evoking the sepia-toned, blood-stained, imperialist past and the hungry, gritty independent realism of modern East Africa. Never one to focus on his own accomplishments, and slow to judge others, he manages to serve up equal portions of humility and pathos." --Lonely Planet

"To discover Africa is a quest that has burned away at the European soul since Ptolemy. Richard Grant goes on his own by bus, boat and foot to reach the source of the (White) Nile and find out what really drives Africa." --San Francisco Book Review

"To discover Africa is a quest that has burned away at the European soul since Ptolemy. Richard Grant goes on his own by bus, boat and foot to reach the source of the (White) Nile and find out what really drives Africa." --San Francisco Book Review