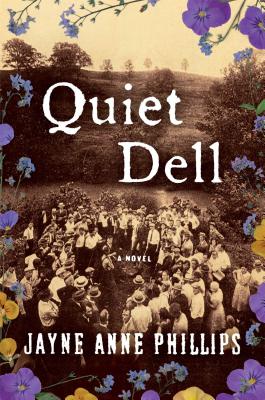 By Jayne Anne Phillips
$28.00
Email or call for price.

“Award-winning author Phillips has been haunted by this story for 40 years. Her novel is based on the murder of the Chicago widow Asta Eicher and her three children in 1931. Lonely and out of money, Asta corresponds with a seemingly moneyed and well-mannered stranger named Harry Powers. She is lured to West Virginia, where, within a few days, the family is brutally murdered. Emily Thornhill is the Chicago journalist who becomes deeply involved in solving the sensational case, during which she falls into a passionate but problematic love affair. Phillips portrays the Eicher family so charmingly, especially the youngest child, Annabelle, that our horror and outrage are tenfold. This earns a place on the shelf with such classics as Night of the Hunter and In Cold Blood.”
— Lisa Howorth, Square Books, Oxford, MS

From one of America’s most accomplished and acclaimed fiction writers, a chilling, spectacularly riveting novel based on a real life multiple murder by a con man who preyed on widows—a story that has haunted Jayne Anne Phillips for more than four decades.

From one of America’s most accomplished and acclaimed fiction writers, a spectacularly riveting novel based on a real-life multiple murder by a con man who preyed on widows— a story that has haunted Jayne Anne Phillips for more than four decades

In Chicago in 1931, Asta Eicher, mother of three, is lonely and despairing, pressed for money after the sudden death of her husband. She begins to receive seductive letters from a chivalrous, elegant man named Harry Powers, who promises to cherish and protect her, ultimately to marry her and to care for her and her children. Weeks later, all four Eichers are dead.

Emily Thornhill, one of the few women journalists in the Chicago press, becomes deeply invested in understanding what happened to this beautiful family, particularly to the youngest child, Annabel, an enchanting girl with a precocious imagination and sense of magic. Bold and intrepid, Emily allies herself with a banker who is wracked by guilt for not saving Asta. Emily goes to West Virginia to cover the murder trial and to investigate the story herself, accompanied by a charming and unconventional photographer who is equally drawn to the case.

Driven by secrets of their own, the heroic characters in this magnificent tale will stop at nothing to ensure that Powers is convicted. Mesmerizing and deeply moving, Quiet Dell is a tragedy, a love story, and a tour de force of obsession and imagination from one of America’s most celebrated writers.

Jayne Anne Phillips is the author of Lark and Termite, Motherkind, Shelter, and Machine Dreams, and the widely anthologized collections of stories, Fast Lanes and Black Tickets. A National Book Award and National Book Critic’s Circle Award finalist, Phillips is the recipient of a Guggenheim Fellowship, two National Endowment for the Arts Fellowships, a Bunting Fellowship, the Sue Kaufman Prize, and an Academy Award in Literature from the American Academy and Institute of Arts and Letters. She is Distinguished Professor of English and Director of the MFA Program at Rutgers-Newark, the State University of New Jersey, where she established The Writers At Newark Reading Series. Information, essays and text source photographs on her fiction can be viewed at JayneAnnePhillips.com.

“[Quiet Dell’s] success is due to a bold decision: Ms. Phillips has written a serial killer novel in which the serial killer hardly appears….Unabashed…There is a glowing beauty to the book’s brave, generous version of history.”
— Sam Sacks

“Sometimes eerie and dreamlike, others grippingly tense, yet warmly human, always written with beauty and emotional power, Quiet Dell is a virtuoso performance by a highly original writer.”
— Colette Bancroft

“Phillips’s effort to do justice — aesthetic and moral — to the victims feels bold and honorable...moving, even transporting…Phillips allows her own ample gifts to soar.”
— Leah Hager Cohen

“Compelling…Richly imagined…Phillips’s achievement is to reveal how intimately cruelty and kindness unfold.”

“An extraordinary achievement, a mesmerizing blend of fact and fiction that borrows from the historical record, including trial transcripts and newspaper accounts, but is cloaked in the shimmering language of a poet.”

“Phillips’ extensive reporting—she quotes from newspaper stories, letters between Eicher and her ‘suitor’ and the trial transcript—gives the book its considerable heft. And her creation of a Chicago reporter named Emily Thornhill helps to frame the story of the eight-decade-old event in a fresh way. Quiet Dell is a smart combination of true crime, history and fiction tied together with Phillips’ seamlessly elegant writing….As the book proceeds to its dark conclusion, Emily offers readers a glimpse of light.”
— Amy Driscoll

“Phillips, an acclaimed writer of largely contemporary fiction, this time draws on history: a criminal case from the early '30s.…But if the factual underpinnings of this latest novel are unusual for Phillips, her ability to transform them into a fictionalized narrative place her at the top of her form. Phillips has carefully inserted imagined private moments and just a few fictional characters to create a story both splendid and irreparably sad… As Phillips has proved throughout her decades of fiction writing, there is evil in the world, but there are some who will stand in its way.”
— Celia McGee

“In Quiet Dell, Phillips mesmerizingly spins together fact and fiction, vividly imagining the circumstances leading to their deaths, and sets a young female reporter on the case to solve it.”
— Elissa Schappell

“Hauntingly imagines the victims’ hopes, dreams, and terror…Phillips blends fact and fiction in a darkly poetic way: The result is an absorbing novel that leaves us rooting for the heroine Emily becomes—and mourning the lives the Eichers never got to enjoy.”
— Arianna Davis

“Jayne Anne Phillips’s unsettling latest, Quiet Dell, spins out from a true crime story involving a 1930s-era-seducer—think Robert Mitchum in The Night of the Hunter—who preys on a widow and her children.”

“Gripping…Chilling…The novel’s heartbeat is Emily, a Chicago Tribune reporter covering Powers’ arrest and trial…Quiet Dell does what Emily can’t, thoughtfully grafting a 21st-century sensibility onto 20th-century ghastliness. Emily resists the fetters placed on her as a journalist and a woman, while Eric, a gay photographer who accompanies her, is a keen observer of closeted life in the South. Phillips exposes the era’s prejudices less to render judgment than to show how cannily people like Emily and Eric worked around them.”
— Mark Athitakis

“A novel of compelling impressions…Triumphant…[Jayne Anne Phillips is] perceptive enough to hear, and respond to, the smallest of humanity’s sounds.”
— Erin McKnight

“Jayne Anne Phillips is one of the finest pure stylists in contemporary literature, and she’s found a story that sounds like a perfect match for her talents.”
— Jeff Baker

“Phillips’s prose is as haunting as the questions she raises about the natures of sin, evil and grace.”

“Phillips’s plot is engaging, romantic, and fecund; her characters are beautiful, accomplished, and good—except for the bad guy, who is very bad indeed.”

“A mesmerizing novel drawn from the annals of infamous true crime…Meticulous, engrossing and spellbinding.”
— Philip Turner

“The truth of all of Phillips’ characterizations is what lies behind this careful novel’s compelling momentum.”
— Brad Hooper

“In a brilliant fusion of fact and fiction, Jayne Anne Phillips has written the novel of the year. It’s the story of a serial killer’s crimes and capture, yes, but it's also a compulsively readable story of how one brave woman faces up to acts of terrible violence in order to create something good and strong in the aftermath. Quiet Dell will be compared to In Cold Blood, but Phillips offers something Capote could not: a heroine who lights up the dark places and gives us hope in our humanity.”
— Stephen King

“Quiet Dell has all the elements of a murder mystery, but its emotional scope is larger and more complex. It combines a strange, hypnotic and poetic power with the sharp tones of documentary evidence. It offers a portrait of rural America in a time of crisis and dramatizes the lives of a number of characters who are fascinating and memorable.”
— Colm Tóibín, author of Brooklyn and The Testament of Mary