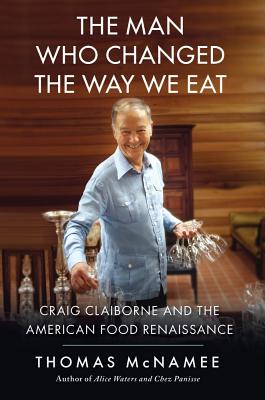 From the bestselling author of Alice Waters and Chez Panisse comes the first biography of Craig Claiborne, the father of the American food revolution, who introduced the world to the likes of Julia Child, Wolfgang Puck, and Alice Waters.

In the 1950s, America was a land of overdone roast beef and canned green beans—a gastronomic wasteland. Most restaurants relied on frozen, second-rate ingredients and served bogus “Continental” cuisine. Authentic French, Italian, and Chinese foods were virtually unknown. There was no such thing as food criticism at the time, and no such thing as a restaurant critic. Cooking at home wasn’t thought of as a source of pleasure. Guests didn’t chat around the kitchen. Professional equipment and cookware were used only in restaurants. One man changed all that.

From the bestselling author of Alice Waters and Chez Panisse comes the first biography of the passionate gastronome and troubled genius who became the most powerful force in the history of American food—the founding father of the American food revolution. From his first day in 1957 as the food editor of the New York Times, Craig Claiborne was going to take his readers where they had never been before. Claiborne extolled the pleasures of exotic cuisines from all around the world, and with his inspiration, restaurants of every ethnicity blossomed. So many things we take for granted now were introduced to us by Craig Claiborne—crème fraîche, arugula, balsamic vinegar, the Cuisinart, chef’s knives, even the salad spinner.

He would give Julia Child her first major book review. He brought Paul Bocuse, the Troisgros brothers, Paul Prudhomme, and Jacques Pépin to national acclaim. His $4,000 dinner for two in Paris was a front-page story in the Times and scandalized the world. And while he defended the true French nouvelle cuisine against bastardization, he also reveled in a well-made stew or a good hot dog. He made home cooks into stars—Marcella Hazan, Madhur Jaffrey, Diana Kennedy, and many others. And Craig Claiborne made dinner an event—whether dining out, delighting your friends, or simply cooking for your family. His own dinner parties were legendary.

Craig Claiborne was the perfect Mississippi gentleman, but his inner life was one of conflict and self-doubt. Constrained by his position to mask his sexuality, he was imprisoned in solitude, never able to find a stable and lasting love. Through Thomas McNamee’s painstaking research and eloquent storytelling, The Man Who Changed the Way We Eat unfolds a history that is largely unknown and also tells the full, deep story of a great man who until now has never been truly known at all.

Thomas McNamee is the author of Alice Waters and Chez Panisse. His writing has been published in The New Yorker, Life, The New York Times, and The Washington Post. He lives in San Francisco.

“Craig Claiborne was the greatest influence of my professional life in America. Knowledgeable, dedicated, and driven, he was determined to better American eating habits. As Thomas McNamee nicely portrays in The Man Who Changed the Way We Eat, Claiborne's impact on the culinary revolution of the last forty years cannot be ignored or overstated.”
—Jacques Pépin

“Thomas McNamee's intensive research, his determined digging in the archives and memories of the major players, brings back the joy, the triumphs, the Hamptons bacchanals of Craig Claiborne—the man who invented professional restaurant criticism.”
—Gael Greene, author of Insatiable: Tales from a Life of Delicious Excess

“The Man Who Changed the Way We Eat assures that a poignant life whose meaning so impacted the restaurant world will not be permitted to fade from our collective memories. Bravo Thomas McNamee for illuminating the erudite gentleman who paved the way for today’s legion of professional restaurant reviewers, as well as for an entire generation of amateur critics who now daily express their judgments on every platform the Internet provides. This must-read book profiles Claiborne’s turbulent, brilliant, and unscripted life - which had such a profound and enduring impacton a huge swath of American culture.”

—Danny Meyer, author of Setting the Table: The Transforming Power of Hospitality in Business