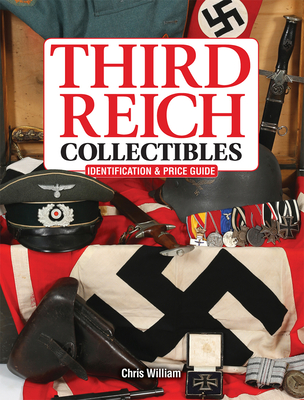 The rise and fall of Germany's Third Reich is one of the most studied, investigated and collected episodes of military history. A reign of terror that rose to near world domination during the 1930s and early 1940s, Adolph Hitler's Germany continues to fascinate generations of scholars and students of history alike.

The Third Reich's insatiable drumbeat of pageantry and propaganda produced countless uniforms, insignia, medals, flags, daggers, swords, and headgear, comprising one of the most desired categories in all of military collectibles to study, understand and own.

Groundbreaking in scope and execution, Third Reich Collectibles features more than 1,300 color images with descriptions and values for:

Throughout the book you'll also find historical background information and period photographs capturing everyday Nazi Germany.
Chris William, a writer for Military Trader magazine, is one of the leading authorities on Third Reich collectibles in the country, having been a collector for 50 years. He lives in Appleton, Wisconsin.