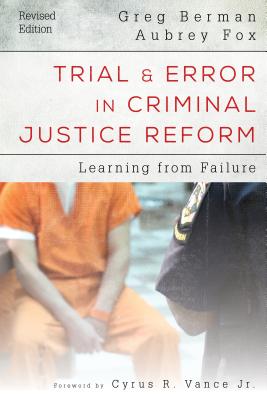 In this revised edition of their concise, readable, yet wide-ranging book, Greg Berman and Aubrey Fox tackle a question students and scholars of law, criminology, and political science constantly face: what mistakes have led to the problems that pervade the criminal justice system in the United States? The reluctance of criminal justice policymakers to talk openly about failure, the authors argue, has stunted the public conversation about crime in this country and stifled new ideas. It has also contributed to our inability to address such problems as chronic offending in low-income neighborhoods, an overreliance on incarceration, the misuse of pretrial detention, and the high rates of recidivism among parolees. Berman and Fox offer students and policymakers an escape from this fate by writing about failure in the criminal justice system. Their goal is to encourage a more forthright dialogue about criminal justice, one that acknowledges that many new initiatives fail and that no one knows for certain how to reduce crime. For the authors, this is not a source of pessimism, but a call to action. This revised edition is updated with a new foreword by Cyrus R. Vance, Jr., and afterword by Greg Berman.
Greg Berman is the director of the Center for Court Innovation, a public-private partnership that seeks to reduce crime, aid victims, and improve public trust in justice. Aubrey Fox is director of special projects for the Center for Court Innovation.