Pickles, Pigs & Whiskey: Recipes from My Three Favorite Food Groups and Then Some (Hardcover) 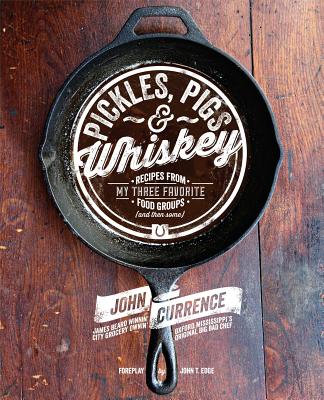 Pickles, Pigs & Whiskey: Recipes from My Three Favorite Food Groups and Then Some (Hardcover)


On Our Shelves Now
Not just another successful Southern chef, James Beard Award-winner John Currence is THE ambassador for Oxford, Mississippi. In his first book, he shares his rugged and fancy style of cooking through 130 delicious recipes, colorful personal stories, music pairings, and beautiful photography.

Chef John Currence would rather punch you in the mouth with his fantastic flavors than poke you in the eye with fancy presentation. In his first cookbook, Currence gives you 130 recipes organized by 10 different techniques, such as Boiling/Simmering, Slathering, Pickling/Canning, Roasting/Braising, Muddling/Stirring, Brining/Smoking, and Baking/Spinning, just to name a few. John's fun-loving personality rings true throughout the book with his personal stories and history, and his one-of-a-kind recipes for Pickled Sweet Potatoes, Whole Grain Guinness Mustard, Deep South "Ramen" with a Fried Poached Egg, Rabbit Cacciatore, Smoked Endive, Fire-Roasted Cauliflower, and Kitchen Sink Cookie Ice Cream Sandwiches. Each recipe has a song pairing with it and the complete list can be downloaded at spotify.com. Over 100 documentary-style color photographs by photographer Angie Mosier complete this stunning look at the South.

Pickles, Pigs, and Whiskey is at once irreverent, and at the same time a serious look at Southern food today. John's upbringing in New Orleans, time spent in his grandparent's garden, experience living in Western Europe, and schooling along the Eastern Seaboard all inform this volume of recipes that reflects where today's Southern culinary landscape is going. This book illustrates why Southern food is finally recognized as the driving force in the American culinary movement today.
Recipient of the 2009 James Beard Foundation Award for Best Chef, John Currence was also honored as Restaurateur of the Year and Chef of the Year by the Mississippi Restaurant Association in 1998. In 2006, he received the Southern Foodways Alliance Guardian of Tradition Award, won the 2008 Great American Seafood Cook-off in New Orleans, and the 2009 Charleston Food and Wine Festival’s Iron Chef Challenge. Currence’s humble beginnings began in his home in New Orleans Louisiana where his family loved to cook and spend time in the kitchen. While studying at the University of North Carolina, Currence got his first job working at Crook’s Corner, where he worked his way up from washing dishes to becoming a cook. After three years at Crook’s, Currence returned to New Orleans to open Gautreau’s as sous chef. After several years, he started working for the Brennan family of restaurants to help open Bacco before settling in Oxford, Mississippi, and opening City Grocery in 1992. Since then, the City Grocery Restaurant Group has had a number of openings, including Nacho Mama’s, Kalo’s, Ajax Diner, City Grocery Catering Company, Bouré, Big Bad Breakfast, Snackbar, and Lamar Lounge. In addition to the City Grocery Restaurant Group’s success, he has served as chairman and president of the Mississippi Restaurant Association and president of the Yoknapatawpha Arts Council. He is also a contributing editor for Garden & Gun Magazine and is an active volunteer with St. Jude’s Children’s Hospital. Other projects include the Adventures of The Big Bad Chef video series. He was also a contestant on the second season of Top Chef Masters. He is an avid hunter and fisherman and lives in Oxford, Mississippi, with his wife and daugher.
"...should be on the reading list of anyone interested not only in Southern cooking, but in taking the pulse of American gastronomy overall." (Julia Reed, Wall Street Journal)

"This has so much voice; perhaps that's why it spoke to me the loudest." (Bonnie Benwick, Washington Post)

"...an irreverent, good-looking coffee-table-size book that you will want for its 130 solid recipes."

"This cookbook...prove the maturation of new New Orleans and new Southern cooking." (Judy Walker, The Times-Picayune)

"...you’ve got yourself a page-turner." (Food Republic)

"Filled to the brim with unbelievably wonderful recipes, this oversized, larger-than-life cookbook is a joy to behold."

"this is a cook book with loads of personality and va-va voom." (Rachel Gladstone, Dish Magazine)