Diary of an 8-Bit Warrior: Path of the Diamond: An Unofficial Minecraft Adventure (Paperback) 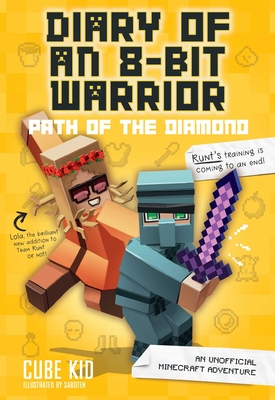 Diary of an 8-Bit Warrior: Path of the Diamond: An Unofficial Minecraft Adventure (Paperback)

This is book number 4 in the Diary of an 8-Bit Warrior series.

Book 4 of the international best-selling 8-Bit Warrior series that takes readers inside the journal of Runt, a young Minecraft villager who dares to dream of becoming a Minecraft warrior!

THESE ARE THE REAL BOOKS BY CUBE KID! DIARY OF AN 8-BIT WARRIOR: PATH OF THE DIAMOND WAS ORIGINALLY PUBLISHED AS WIMPY VILLAGER KINDLES 11 & 12.

In the fourth in this series of four unofficial Minecraft adventure books, it’s time for our 12-year-old hero to choose his future vocation to study at the Minecraftia school. His options are less than tantalizing: farmer, butcher, crafter, miner. What this noob really wants is to be a warrior like his hero, Steve. So when he learns that the five best students in school that year will get the chance to start warrior training, it’s ON.
Cube Kid is the pen name of Erik Gunnar Taylor, a 33-year-old author who lives in Alaska. A fan of video games—and particularly Minecraft—he started writing fanfiction at a very young age. His first novel, The Diary of a Minecraft Villager, was self-published as an ebook in February 2015 and quickly became tremendously successful in the Minecraft community. The novel was acquired by the French publisher Édi8, and was published for the first time in France in February 2016 under the title LE JOURNAL D'UN NOOB, with new illustrations by Saboten. The Diary of a Minecraft Villager sparked worldwide interest.
When he is not writing, Cube Kid loves travelling, fixing his car, voraciously reading fanfiction . . . and gaming!