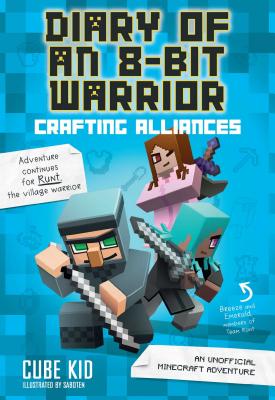 This is book number 3 in the Diary of an 8-Bit Warrior series.

Book 3 of the international best-selling 8-Bit Warrior series that takes readers inside the journal of Runt, a young Minecraft villager who dares to dream of becoming a Minecraft warrior!

THESE ARE THE REAL BOOKS BY CUBE KID! DIARY OF AN 8-BIT WARRIOR: CRAFTING ALLIANCES WAS ORIGINALLY PUBLISHED AS WIMPY VILLAGER KINDLES 9 & 10.

Competition stiffens in book three of the 8-Bit Diary series, as Runt’s training is intensifying! After the recent mob attacks, the entire village decides to prepare for the next offensive. Fortifying the defenses, tracking down a spy, searching for new alliances . . .
But Herobrine isn’t having any of it . . .
Can Runt increase his efforts to be one of the five best students in school and finally become the warrior of his dreams? With the help of his friends—Breeze, Max, Emerald, and Stump—Runt will face a peril greater than anything he has ever known.
Cube Kid is the pen name of Erik Gunnar Taylor, a 33-year-old author who lives in Alaska. A fan of video games—and particularly Minecraft—he started writing fanfiction at a very young age. His first novel, The Diary of a Minecraft Villager, was self-published as an ebook in February 2015 and quickly became tremendously successful in the Minecraft community. The novel was acquired by the French publisher Édi8, and was published for the first time in France in February 2016 under the title LE JOURNAL D'UN NOOB, with new illustrations by Saboten. The Diary of a Minecraft Villager sparked worldwide interest.
When he is not writing, Cube Kid loves travelling, fixing his car, voraciously reading fanfiction . . . and gaming!