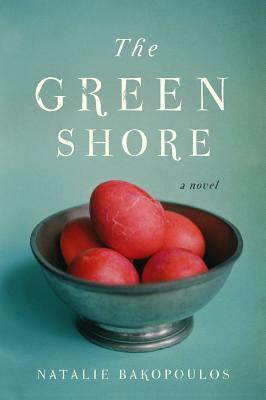 “As we follow the current economic travails of Greece, it is hard not to recall its turbulent history, particularly The Regime of the Colonels that ruled from 1967 to 1974. Bakopoulos humanizes this period through the eyes of one family -- a widowed doctor, her three children, and her brother, a notorious local poet. The personal and political mash up in this passionate story, at once a tale of a particular place and time, yet also a timeless mirror of the struggles of life under any repressive government. A compelling read.”
— Daniel Goldin, Boswell Book Company, Milwaukee, WI

Set in Athens and Paris, Natalie Bakopoulos’s masterful debut paints a finely etched portrait of one family, whose heartbreaking stories of love and resistance play out against the backdrop of the late 1960s Greek military dictatorship.

IN HER MASTERFUL DEBUT NOVEL, The Green Shore, award-winning writer NatalieBakopoulos vividly illuminates a seminal yet little-explored moment in Greek history: the 1967 military coup d’état, which ushered in a seven-year period of devastating brutality and repression.

Through lyrical prose of wisdom and sophistication, we follow the adventures of one family, whose stories of love and resistance play out against the backdrop of this turbulent period. Eleni, a widowed doctor, struggles with her lost sense of passion, both personal and political, in the face of this latest challenge to democracy. Her brother, Mihalis, an eccentric poet of some renown, finds himself keeping a low profile as he attempts to reconcile with his estranged wife. Eleni’s daughter Sophie, a student of French literature, gets swept up in the resistance alongside her privileged, left-leaning boyfriend, while her youngest child, pensive Anna, watches events unfold with increasing anxiety. As the years pass and the dictatorship’s oppressive rule continues unchallenged, their lives unfold in surprising ways, each seeking and finding love and fulfillment as they struggle to make their own peace with when to stay silent and when to act.

Set in Athens and Paris, The Green Shore is an ambitiously told and transporting literary tour de force that delves into a momentous episode in the history of a distant country. The stories of these unforgettable characters sear our hearts and make us understand not only this place, but also what it means to be human, in a new way.
Natalie Bakopoulos holds an MFA in fiction from the University of Michigan, where she now teaches. Her work has appeared in Tin House, Ninth Letter, Granta.com, Salon.com, The New York Times, and The New York Times Book Review, and has received an O. Henry Award, a Hopwood Award, and the Platsis Prize for Work in the Greek Legacy. She is a contributing editor for the online journal Fiction Writers Review. The Green Shore is her first novel.
“Bakopoulos has an enormous heart, and she is a writer to watch."

“Natalie Bakopoulos, in her sharp debut novel . . . [explores] the ways oppression clarifies and complicates desire, either binding our emotional and political selves or snapping them in two.”
— Mark Athitakis

“The Green Shore is an extremely compelling, deeply personal tale . . . this searing literary accomplishment renders clear a monumental episode in our world history through the very intimate portrait of one family.”
— Jenni Herrick

“Natalie Bakopoulos has that rare gift, the ability to imagine a traumatic historical event in the form of individual lives and ordinary details. The Green Shore is compelling, personal, and full of quietly real moments.”
— Elizabeth Kostova

"The writing is lush, tinged with sexual longing and fear and with dreams that are interrupted."

“The Green Shore is an engrossing novel about political oppression, played out on an intimate family scale. Bakopoulos charts the subtle, gnawing pressures of life under the Greek junta—the steady drip of daily coercion—with an exacting empathy. In particular, her depiction of love under tyranny—by turns hesitant, furtive and liberating—is as astute as it is moving.”
— Peter Ho Davies

“The slow descent of political oppression and its invasion of private life—both these subjects are treated with insight and deep feeling in Natalie Bakopoulos's ambitious novel. Her characters are ‘on fire, exploding from the inside out,’ and they all reveal themselves memorably under the terrible (and sometimes ordinary) political and private circumstances in which they find themselves.”
— Charles Baxter

“The family at the center of Natalie Bakopoulos’s gripping debut novel exists at the crossroads where the personal meets the political, as they indulge their idiosyncrasies and develop their destinies during Greece's military dictatorship of the late 60s and early 70s. There’s plenty of drama and catharsis, as befitting a Greek tragedy, but the book remains, at heart, a meditation on the constant pain of nostalgia for times and places we have lost, and an exploration of how we express love—of family, partner, and country—in times of oppression.”
— Eleni N. Gage

“Warm, engaging characters and a richly authentic Greek setting make for an engaging read with commercial appeal...Bakopoulos’s juxtaposition of a historic conflict with the joys and trials of motherhood, the heedlessness of youth, and the durability of family ties is poignant and effective.”

“Deeply imbued with the passion and honor synonymous with Greek culture, abundant with sensuous imagery and stimulating discourse, Bakopoulos’ debut novel is a sumptuous and provocative portrait of the nexus of the personal with the political.”

“Bakopoulos is ambitious, sympathetically attentive to her characters and frequently perceptive. When she combines those virtues with her strongest writing, her promise as a novelist shows.”