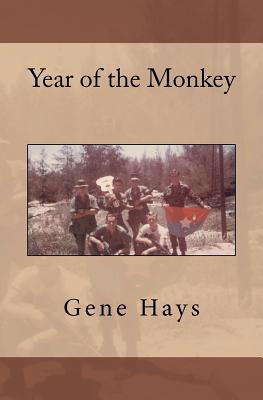 Following in the footsteps of Civic Action, A True Story, Year of the Monkey tells the story of how Major Rich Risner and Staff Sergeant Dick Petterson first met. In a never before told story, the two Marines were assigned to a secret mission in the 1950s that would affect them both for the rest of their careers and lives. Reunited in Vietnam, they found themselves again depending on each other for their very lives. With more harrowing detail and a surprising twist to the end not contained in Civic Action, Year of the Monkey is a page-turner full of action and suspense.

Gene Hays lives with his wife Barbara in Oxford, Mississippi along with three of his sons and their families. The second oldest son, Eric, has served in the U.S. Army in South Korea, Afghanistan and Iraq. Gene retired from Active Duty in the Marine Corps in January 1986 and was transferred to the Regular Retired List in 1995. At his retirement in 1986, Gene was awarded the Meritorious Service Medal. His personal decorations include the Navy Achievement Medal with Combat "V" and the Combat Action Ribbon, as well as several letters of commendation. After his retirement, Gene worked for Martin Marietta Data Systems for five years, and went on to teach electronics at two different two-year colleges. In 1996, Booz-Allen, Hamilton Inc. selected Gene as a Senior Consultant to the Royal Saudi Naval Forces in Jeddah, Kingdom of Saudi Arabia. Since returning in 1997 from Saudi Arabia, Gene has worked in his field of electronics and in the banking industry. Gene is a member of the J.C. Hooker Detachment, Marine Corps League Pontotoc, MS and Vietnam Veterans of America. You can contact him by e-mail at rghays47@gmail.com.