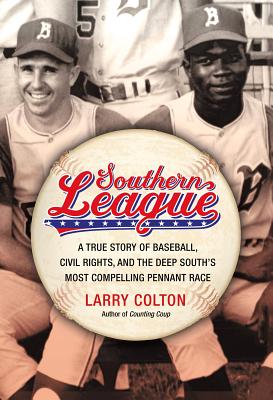 Bestselling and award-winning author and former major league pitcher Larry Colton shares the story of the Birmingham Barons, the first racially-integrated team of any sport in the state of Alabama, just few months after the horrific 1964 Birmingham church bombing which killed four young black girls.

Anybody who is familiar with the Civil Rights movement knows that 1964 was a pivotal year. And in Birmingham, Alabama - perhaps the epicenter of racial conflict - the Barons amazingly started their season with an integrated team.

Johnny "Blue Moon" Odom, a talented pitcher and Tommie Reynolds, an outfielder - both young black ballplayers with dreams of playing someday in the big leagues, along with Bert Campaneris, a dark-skinned shortstop from Cuba, all found themselves in this simmering cauldron of a minor league town, all playing for Heywood Sullivan, a white former major leaguer who grew up just down the road in Dothan, Alabama.

Colton traces the entire season, writing about the extraordinary relationships among these players with Sullivan, and Colton tells their story by capturing the essence of Birmingham and its citizens during this tumultuous year. (The infamous Bull Connor, for example, when not ordering blacks to be blasted by powerful water hoses, is a fervent follower of the Barons and served as a long-time broadcaster of their games.)

By all accounts, the racial jeers and taunts that rained down upon these Birmingham players were much worse than anything that Jackie Robinson ever endured.

More than a story about baseball, this is a true accounting of life in a different time and clearly a different place. Seventeen years after Jackie Robinson had broken the color line in the major leagues, Birmingham was exploding in race riots....and now, they were going to have their very first integrated sports team. This is a story that has never been told.

Larry Colton is the author of several notable works, including Counting Coup, Goat Brothers, and No Ordinary Joes. He has written for Esquire, Sports Illustrated, and the New York Times Magazine. A former pitcher for the Philadelphia Phillies, Colton himself played in the Southern League in 1966 for a farm team in Macon, GA.

"When I read "Counting Coup," I was staggered by Larry Colton's ability to persuade a group of high school girls to share their heart's secrets, so I am not surprised that for "Southern League" he could get a bunch of aging baseball players to remember the hopes and fears of their minor league days. The breadth of Colton's reporting here, placing the Birmingham Barons' 1964 season squarely into the context of the civil rights era, is a narrative tour de force.
-- Richard Ben Cramer

Those who say that sports do not, or should not, make us think about anything beyond the field itself have always been wrong . The summer of '64 and the stories found in Southern League demonstrate that once again.

Larry Colton has an extraordinary gift for capturing those times when everyday, glitz and glamor-free American sports, is not merely a metaphor for our culture but becomes a mechanism for cultural change. His highest expression of that gift comes now in SOUTHERN LEAGUE in which he introduces you to players nobody has yet built statues of, but who forced sea-changes in the America in which you live.

Larry Colton's interweaving of the 1964 Southern League baseball season with the Civil Rights movement revisits a period in American history that many of us will not - and should not - forget. With Colton's retelling of players enduring racial insults on the field and threats and other indignities off the field, SOUTHERN LEAGUE makes for riveting, and revealing, reading.

"I can't say this loud enough...this is a great book! I'd throw in an f-bomb for emphasis but that sort of thing is frowned upon in high literary circles. The explosive racial cauldron of Birmingham in the sixties, unforgettable characters, and baseball all come together in Larry Colton's memorable narrative, SOUTHERN LEAGUE. Baseball is the tie that binds, barely, but that's enough."

This terrific rendering is highly recommended both to baseball fans and to students of civil rights history and African-American studies.


Entertaining and painstakingly crafted, Colton's account of the Birmingham Barons is a tribute to determination and courage in the face of overwhelming adversity.


The narrative of future major leaguers Johnny "Blue Moon" Odom, Tommie Reynolds, and Bert Campaneris playing on a minor-league team run by future and former Red Sox owner Haywood Sullivan in racially segregated and explosive Birmingham, Alabama, during the 1960s is as good a snapshot of social history as a sports book in recent years.


SOUTHERN LEAGUE deserves to be considered one of the eye-opening books of its type and will serve as a teaching tool for those who believe that sports --- and life --- in America was always as it is today.

Another excellent recounting of race relations in baseball.


Thorough research and a wonderful weave of personalities are parts of what make "Southern League" the best baseball book of the new season.