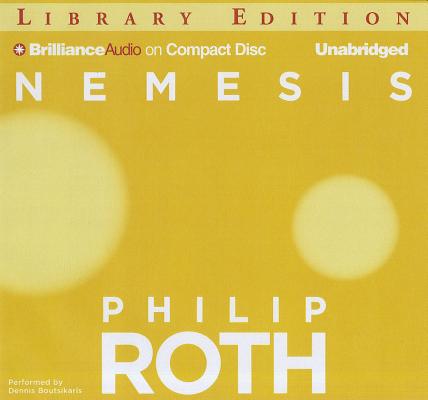 By Philip Roth, Dennis Boutsikaris (Read by)
Email or call for price
Hard to Find - Email or Call for Availability

In the "stifling heat of equatorial Newark," a terrifying epidemic is raging, threatening the children of the New Jersey city with maiming, paralysis, lifelong disability, and even death. This is the startling theme of Philip Roth's wrenching new book: a wartime polio epidemic in the summer of 1944 and the effect it has on a closely knit, family-oriented Newark community and its children.

At the center of Nemesis is a vigorous, dutiful twenty-three-year-old playground director, Bucky Cantor, a javelin thrower and weightlifter, who is devoted to his charges and disappointed with himself because his weak eyes have excluded him from serving in the war alongside his contemporaries. Focusing on Cantor's dilemmas as polio begins to ravage his playground--and on the everyday realities he faces--Roth leads us through every inch of emotion such a pestilence can breed: the fear, the panic, the anger, the bewilderment, the suffering, and the pain.

Moving between the smoldering, malodorous streets of besieged Newark and Indian Hill, a pristine children's summer camp high in the Poconos--whose "mountain air was purified of all contaminants"--Roth depicts a decent, energetic man with the best intentions struggling in his own private war against the epidemic. Roth is tenderly exact at every point about Cantor's passage into personal disaster, and no less exact about the condition of childhood.

Through this story runs the dark questions that haunt all four of Roth's late short novels, Everyman, Indignation, The Humbling, and now Nemesis: What kind of accidental choices fatally shape a life? How does the individual withstand the onslaught of circumstance?