The Opium War: Drugs, Dreams, and the Making of Modern China (Paperback) 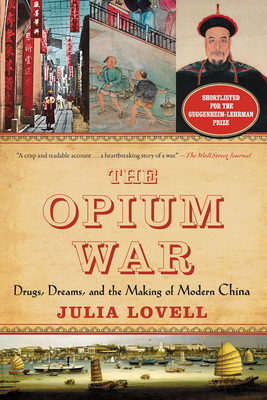 The Opium War: Drugs, Dreams, and the Making of Modern China (Paperback)


Usually Arrives in Store in 1-5 Days
In October 1839, a Windsor cabinet meeting votes to begin the first Opium War against China. Bureaucratic fumbling, military missteps, and a healthy dose of political opportunism and collaboration followed. Rich in tragicomedy, The Opium War explores the disastrous British foreign-relations move that became a founding myth of modern Chinese nationalism, and depicts China’s heroic struggle against Western conspiracy. Julia Lovell examines the causes and consequences of the Opium War, interweaving tales of the opium pushers and dissidents. More importantly, she analyses how the Opium Wars shaped China's self-image and created an enduring model for its interactions with the West, plagued by delusion and prejudice.
Julia Lovell is an author, translator, and academic. She is the author of the widely acclaimed The Great Wall: China Against the World 1000 BC–AD 2000, which was published in eighteen countries. She has translated many key Chinese works into English, including Lust, Caution by Eileen Chang, The Complete Fiction of Lu Xun, and Serve the People by Yan Lianke. She is a lecturer in modern Chinese history and literature at the University of London and writes for the Guardian, The Times, the Economist, and the Times Literary Supplement. She spends a large part of the year in China with her family.