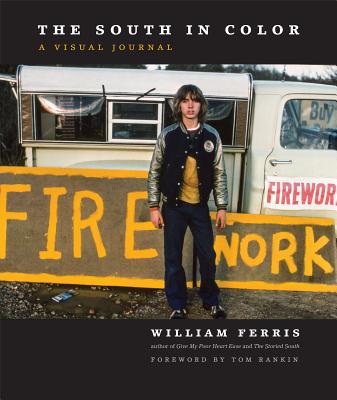 This provocative and lovely book of 100 photographs reaches the intimate environs of Bill Ferris, his Mississippi, and his beginnings as a trailblazing folklorist. It is a gift to those of us who appreciate or admire his work and the man himself.

Since the moment William Ferris's parents gave their twelve-year-old son a Kodak Brownie Hawkeye camera for Christmas in 1954, Ferris passionately began to photograph his world. He has never stopped. The sixties and seventies were a particularly significant period for Ferris as he became a pathbreaking documentarian of the American South. This beautiful, provocative collection of 100 of Ferris's photographs of the South, taken during this formative period, capture the power of his color photography. Color film, as Ferris points out in the book's introduction, was not commonly used by documentarians during the latter half of the twentieth century, but Ferris found color to work in significant ways in the photographic journals he created of his world in all its permutations and surprises.

The volume opens with images of his family's farm and its workers--family and hired--southeast of Vicksburg, Mississippi. The images are at once lyrical and troubling. As Ferris continued to photograph people and their homes, churches, and blues clubs, their handmade signs and folk art, and the roads that wound through the region, divisive racial landscapes become part of the record. A foreword by Tom Rankin, professor of visual studies and former director of the Center for Documentary Studies at Duke University, provides rich insight into Ferris's work.