The Stowaway: A Young Man's Extraordinary Adventure to Antarctica (Paperback) 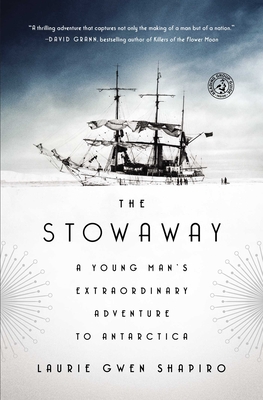 The Stowaway: A Young Man's Extraordinary Adventure to Antarctica (Paperback)

“The story of Billy Gawronski, the young man who repeatedly tried to join Richard Byrd's Antarctic expedition, reads like an adventure novel. The reality of his life is beyond the realm of the wildest imagination. Shapiro brings this resilient and resourceful man to life against the changing world of the Roaring Twenties, and his story perfectly reflects a world undergoing vast change. Combining narrative, science, and portraits of outsized personalities, Shapiro treats the reader to a story that is not only relevant but a total joy.”
— Bill Cusumano, Square Books, Oxford, MS

“Usually I shy away from nonfiction, but I was riveted by this tenacious young stowaway’s journey to Antarctica. Shapiro wrangles a large cast of characters, and the breadth of her research is astounding. The Stowaway is accessible and intellectually stimulating; I learned so much.”
— Emily Perper, Curious Iguana, Frederick, MD

The saga of Billy Gawronski, the young man who continually hid on ships to join Richard Byrd's Antarctic expedition reads like an adventure novel. The reality of his life was beyond the realm of the wildest imagination. This resilient and resourceful man is brought to life against the changing world of the Roaring '20s and his story perfectly reflects the times of a world undergoing vast change. Combining narrative, science and portraits of outsized personalities, the reader is treated to a story that is not only relevant but a total joy as Billy makes his way in the world.

— From Bill's 2018 Picks
The spectacular, true story of a scrappy teenager from New York’s Lower East Side who stowed away on the most remarkable feat of science and daring of the Jazz Age, The Stowaway is “a thrilling adventure that captures not only the making of a man but of a nation” (David Grann, bestselling author of Killers of the Flower Moon).

It was 1928: a time of illicit booze, of Gatsby and Babe Ruth, of freewheeling fun. The Great War was over and American optimism was higher than the stock market. What better moment to launch an expedition to Antarctica, the planet’s final frontier?

Everyone wanted in on the adventure. Rockefellers and Vanderbilts begged to be taken along as mess boys, and newspapers across the globe covered the planning’s every stage. And then, the night before the expedition’s flagship set off, Billy Gawronski—a mischievous, first-generation New York City high schooler, desperate to escape a dreary future in the family upholstery business—jumped into the Hudson River and snuck aboard.

Could he get away with it?

From the soda shops of New York’s Lower East Side to the dance halls of sultry Francophone Tahiti, all the way to Antarctica’s blinding white and deadly freeze, author Laurie Gwen Shapiro “narrates this period piece with gusto” (Los Angeles Times), taking readers on the “novelistic” (The New Yorker) and unforgettable voyage of a plucky young stowaway who became a Roaring Twenties celebrity, a mascot for an up-by-your bootstraps era.
Laurie Gwen Shapiro is an award-winning documentary filmmaker and journalist. The Stowaway is her first full-length work of nonfiction.
“Shapiro has rescued from oblivion a wondrous tale of exploration. The Stowaway is a thrilling adventure that captures not only the making of a man but of a nation.”
— David Grann, bestselling author of Killers of the Flower Moon

“The Stowaway proves that fact is stranger and funnier and more amazing than fiction. Laurie Gwen Shapiro artfully draws the reader into the tale of Billy Gawronski, a dreamer and adventurer. Through the wild story of his travels to Antarctica, we see history come vividly to life.”
— Susan Orlean, bestselling author of Rin Tin Tin

“Laurie Gwen Shapiro wrote The Stowaway like a Jack London novel: with a sense of adventure, wonderful detail, a lineup of intriguing characters, and above all a great story. This is the best of nonfiction.”
— Mark Kurlansky, bestselling author of Paper

“A fascinating window into... the exuberant 1920s and the crushing Depression that followed.... A must-read.”
— USA Today

“Inspired by [an] engrossing yet little-known case of derring-do, [The Stowaway] evokes the magic of early 20th-century New York.”
— The New York Times

“What has the world come to when sled dogs and short wave radio mix, when wooden sailing barks compete with aeroplanes, when ‘Eskimos’ figuratively dance with flappers, and all of this is captured and disseminated by the first public relations hucksters? Laurie Gwen Shapiro’s The Stowaway is magnificent.”
— Bob Drury & Tom Clavin, bestselling authors of The Heart of Everything That Is

“The Stowaway tells one of the most engaging, but forgotten, stories from the Age of Exploration. A fascinating and charming book—I highly recommend it!”
— Douglas Preston, bestselling author of The Lost City of the Monkey God

“Isn’t this how history sometimes is best told, when a passing curiosity melds with diligent work? The Stowaway is a charming book, a glimpse of history that, by definition, fascinates and delights.”
— Minneapolis Star-Tribune

“Laurie Gwen Shapiro's The Stowaway is full of twists, turns, and moments of pure wonder—both joy to read and a surprisingly insightful tale of scientific exploration at its generous and courageous best.”
— Deborah Blum, bestselling author of The Poisoner’s Handbook

“A gripping, gritty, mischievous tale from an age of exploration and wonder. The Stowaway makes real history read like a boy’s adventure novel.”
— Kevin Baker, bestselling author of Paradise Alley

“An engaging story, engagingly told, that makes the reader root for Billy... [and] prompts one to ponder the effects of social class on fate, and the special qualities that make some people push themselves to the limit.”
—The Wall Street Journal

“Every now and then, history presents us with a life that seems almost impossible to believe. Such is the case with Billy Gavronski.... Shapiro offers a detailed look at... perhaps the last time an earthbound explorer was able to so dominate the public’s interest.”
— Barnes & Noble (A Best History Book of January 2018)

“A true life adventure that reads like something out of a novel.”
— Amazon (A Best History Book of January 2018)

“I read nonfiction almost exclusively... and I’ll be blunt: this has been a depressing year, filled with political works and stories of America’s decline and social disintegration. But Laurie Gwen Shapiro's fascinating book saved my reading year, offering an incredible story, and a reminder that American Exceptionalism once had real meaning.”
— Publishers Weekly

“Entertaining as hell. There's no question that this is an adventure story for the ages.”
— The Maine Edge

“So much more enjoyable than watching the evening news.”
— The Bismark Tribune

“If sheer gumption is a human trait as honorable as actual accomplishment, then we should build a statue to this bold immigrant son of an interior designer. In Shapiro’s splendid recount of Gawronski’s most famous feat, we’re taken upon a magnificent journey from the vantage of the ultimate outsider.”
— The Bowery Boys

“An inspiring, not-to-be missed story. The Stowaway is not only Gawronski’s tale; it also highlights a time in our nation’s history when people thrilled to the excitement of exploration, and daring men and women... rose to unprecedented challenges.”
— The Missourian

“Shapiro has revived the history of a once-celebrated stowaway to Antarctica in this well-wrought true tale of a young man who captured the hearts of millions and found adventure at sea.”
— Booklist

“How [Shapiro] conjures the atmosphere and hardships of seafaring life impresses... [and] Billy is a fascinating central character.”
— New York Journal of Books

“The narrative reads like a yarn from that era... [and] ultimately reveals as much about a country’s changing values as it does about one boy’s pluck.”
— Kirkus Reviews

“This fascinating and exciting story contrasts the optimism and sense of progress of the 1920s with the devastation of the 1930s. Readers... will find much to delight in here.”
— Library Journal