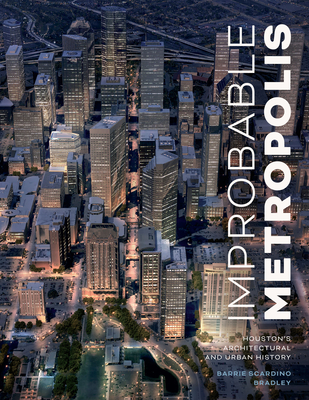 2021 Summerlee Book Prize (Nonfiction), Center for History and Culture of Southeast Texas and the Upper Gulf Coast at Lamar University

Just over 180 years ago, the city of Houston was nothing more than an alligator-infested swamp along the Buffalo Bayou that spread onto a flat, endless plain. Today, it is a sprawling, architecturally and culturally diverse metropolis. How did one transform into the other in such a short period?

Improbable Metropolis uses the built environment as a guide to explore the remarkable evolution that Houston has undergone from 1836 to the present. Houston’s architecture, an indicator of its culture and prosperity, has been inconsistent, often predictable, sometimes bizarre, and occasionally extraordinary. Industries from cotton, lumber, sugar, and rail and water transportation, to petroleum, healthcare, biomedical research, and aerospace have each in turn brought profit and attention to Houston. Each created an associated building boom, expanding the city’s architectural sophistication, its footprint, and its cultural breadth. Providing a template for architectural investigations of other American cities, Improbable Metropolis is an important addition to the literature on Texas history.

Barrie Scardino Bradley has been writing and lecturing about Houston history and Texas architecture for more than thirty-five years.
Bradley conveys [the story of Houston through its buildings and places] in an even and accessible writing style...Improbable Metropolis is a visual treat...the book object would hold its own on any Houstonian’s coffee table.
— Cite Magazine

[Improbable Metropolis] is big, beautiful and comprehensive...starting with the startling book jacket, which shows the downtown skyline from an unexpected angle at night, it is a feast for the eyes...I cannot imagine how much labor went into this magnificent book.
— Austin American Statesman

Although Houston has been the fourth-largest city in the United States since 1969, it does not receive the scholarly attention from historians that its size deserves; Bradley’s handsome volume helps rectify this neglect...Bradley’s deep familiarity with her subject will enthrall lay readers and will inspire specialists to enrich Houston’s story by exploring numerous topics further.
— Journal of Southern History

Throughout Improbable Metropolis, Bradley intertwines Houston’s two dominant and diverging narratives of southern gentility and aggressive economic policies to reveal an often contradictory and yet incredible architectural history that challenges our assumptions about the generative principles of a metropolis.
— ARRIS