Our Favorite Day of the Year (Hardcover) 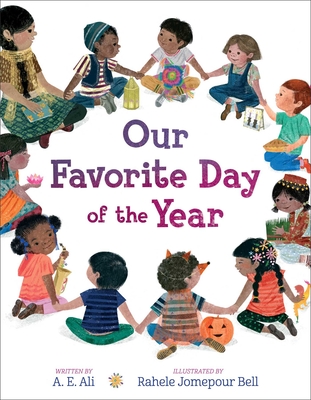 Our Favorite Day of the Year (Hardcover)

A heartwarming picture book following a group of boys from different backgrounds throughout the school year as they become the best of friends.

Musa’s feeling nervous about his first day of school. He’s not used to being away from home and he doesn’t know any of the other kids in his class. And when he meets classmates Moisés, Mo, and Kevin, Musa isn’t sure they’ll have much in common. But over the course of the year, the four boys learn more about each other, the holidays they celebrate, their favorite foods, and what they like about school. The more they share with each other, the closer they become, until Musa can’t imagine any better friends.

In this charming story of friendship and celebrating differences, young readers can discover how entering a new friendship with an open mind and sharing parts of yourself brings people together. And the calendar of holidays at the end of the book will delight children as they identify special events they can celebrate with friends throughout the year.
A. E. Ali is a writer based in California. Her favorite day of the year is Eid al-Fitr.

Rahele Jomepour Bell is an illustrator of several picture books, including Our Favorite Day of the Year by A. E. Ali on the Salaam Reads list. Rahele came to the United States from Iran in 2011 and pursued her dream of studying art at Iowa State University where she received her MFA in integrated visual arts. She believes all people share a common home in planet Earth, but may differ in their skin color, way of life, and their thinking. She loves these differences and believes this is what makes the world a beautiful place to live. Visit her at RaheleStudio.com.
Praise for Our Favorite Day of the Year

* “This celebration of diversity and friendship includes lush descriptions of each holiday and can serve as an entry point for any one of them. Bell’s textured illustrations are festive and youthful, picturing a diverse, child-centered world…The dual focus on friendship and diversity makes this choice a winner.”—Kirkus Reviews, starred

* “A comforting story that will help build bridges among children of different backgrounds and faiths.”—School Library Journal, starred

* “Gorgeously inviting illustrations and a joyful theme will likely make Our Favorite Day of the Year kindergarten classrooms' favorite book of the year…This lovely book is the consummate first day read for preschool or kindergarten.”—Shelf Awareness, starred

* “Readers will revel in this openhearted look at how friendships are easy to form when everyone is willing to share and rejoice in what makes each person unique.”—BookPage, starred

“An abundance of skin tones, body types, and facial features adds to the diversity in this vibrantly colorful, happy book.”—Booklist