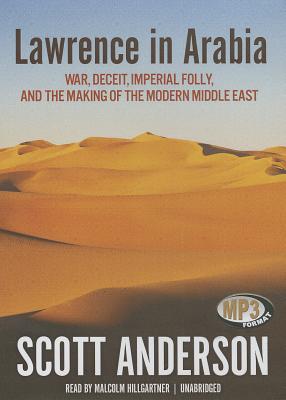 By Scott Anderson, Malcolm Hillgartner (Read by)
Email or call for price
Special Order -- Email or Call for Availability

A thrilling and revelatory narrative of one of the most epic and consequential periods in twentieth century history--the Arab Revolt and the secret game to control the Middle East The Arab revolt against the Turks in World War I was, in the words of T. E. Lawrence, "a sideshow of a sideshow." As a result, the conflict was shaped to a remarkable degree by a small handful of adventurers and low-level officers far removed from the corridors of power. Curt Prufer was an academic attached to the German embassy in Cairo whose clandestine role was to foment jihad against British rule. Aaron Aaronsohn was a renowned agronomist and committed Zionist who gained the trust of the Ottoman governor of Palestine even as he built an elaborate anti-Ottoman spy ring. William Yale was a fallen scion of the American aristocracy who traveled the Ottoman Empire on behalf of Standard Oil, dissembling to the Turks in order to gain valuable oil concessions. At the center of it all was Lawrence. In early 1914 he was an archaeologist digging ruins in Syria; by 1917 he was riding into legend at the head of an Arab army, as he fought a rearguard action against his own government and its imperial ambitions. Based on four years of intensive primary document research, Lawrence in Arabia definitively overturns received wisdom on how the modern Middle East was formed. Sweeping in its action, keen in its portraiture, acid in its condemnation of the destruction wrought by European colonial plots, this is a book that brilliantly captures the way in which the folly of the past creates the anguish of the present.