Stealing the Show: A History of Art and Crime in Six Thefts (Hardcover) 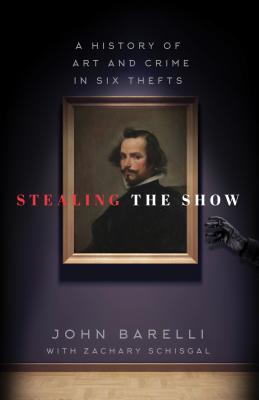 Stealing the Show: A History of Art and Crime in Six Thefts (Hardcover)

By John Barelli, Zach Schisgal (With)


Email or call for price.
When he retired as the chief security officer of New York City's Metropolitan Museum of Art, John Barelli had spent the better part of forty years responsible not only for one of the richest treasure troves on the planet, but the museum's staff, the millions of visitors, as well as American presidents, royalty, and heads of state from around the world. For the first time, John Barelli shares his experiences of the crimes that occurred on his watch; the investigations that captured thieves and recovered artwork; the lessons he learned and shared with law enforcement professionals in the United States and abroad; the accidents and near misses; and a few mysteries that were sadly never solved. He takes readers behind the scenes at the Met, introduces curators and administrators, walks the empty corridors after hours, and shares what it's like to get the call that an ancient masterpiece has gone missing. The Metropolitan Museum covers twelve acres in the heart of Manhattan and is filled with five thousand years of work by history's great artists known and unknown: Goya, da Vinci, Rembrandt, Warhol, Pollack, Egyptian mummies, Babylonian treasures, Colonial crafts, and Greek vases. John and a small staff of security professionals housed within the Museum were responsible for all of it. Over the years, John helped make the museum the state-of-the-art facility it is today and created a legacy in art security for decades to come. Focusing on six thefts but filled with countless stories that span the late 1970s through the 21st Century, John opens the files on thefts, shows how museum personnel along with local and sometimes Federal Agents opened investigations and more often than not caught the thief. But of ultimate importance was the recovery of the artwork, including Celtic and Egyptian gold, French tapestries, Greek sculpture, and more. At the heart of this book there will always be art--those who love it and those who take it, two groups of people that are far from mutually exclusive.
John Barelli spent thirty-eight years working in the Security Department at the Metropolitan Museum of Art (1978-82 Assistant Manager of Security; 82-86 Associate Manager of Security (2nd in charge); 86-2001 Head of the Security Department; 01-16 Chief Security Officer). For more than thirty years he was the individual who ran all security operations and formed and developed the department as a leader in museum security throughout the world (his purview also included The Met Cloisters and The Met Breuer Museum). He holds an MA in Criminal Justice and a PhD in Criminology. He lives with his wife, Anna, in New York City. They met at the Met.