Bag of Bones: The Sensational Grave Robbery Of The Merchant Prince Of Manhattan (Paperback) 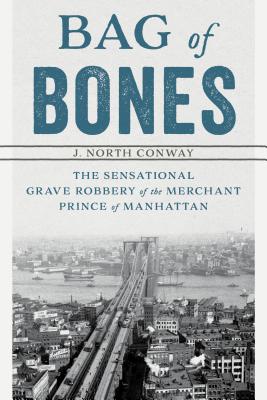 Bag of Bones: The Sensational Grave Robbery Of The Merchant Prince Of Manhattan (Paperback)


Usually Arrives in Store in 1-5 Days
Completing J. North Conway's widely acclaimed trilogy of Gilded Age New York City Crime-following King of Heists and The Big Policeman-Bag of Bones combines the era's affluence, decadence, and corruption with a gruesome deed fit for the tabloids of today. In 1878, the body of multi-millionaire A. T. Stewart was stolen from St. Mark's Churchyard. The ghoulish crime, the chase for the culprits, the years-long ransom negotiations, and the demise of the Stewart retail empire fed a media frenzy. When the widow Stewart eventually exchanged $20,000 for a burlap bag of bones on a country road, not everyone was convinced that the remains were truly those of "The Merchant Prince of Manhattan," the department store pioneer who had risen from the flood of Irish immigration to a place alongside names like Astor, Vanderbilt, and Rockefeller. As Bag of Bones details the futile tactics used by police to identify the grave robbers, it also unveils the villainy of Judge Henry Hilton, the Stewart family advisor who not only interfered in the case repeatedly but also dismantled a once-great business empire . . . all the while profiting quite nicely. By the end of this fascinating slice of history, one is left to wonder who displayed the greater evil: the grave robbers or Judge Hilton.
J. NORTH CONWAY is the author of nine non-fiction books, including, The Big Policeman(2010) and King of Heists (2009) both published by the Lyons Press. He is also the author of The Cape Cod Canal: Breaking Through The Bared and Bended Arm, published by History Press in 2008 and American Literacy: Fifty Books That Define Our Culture and Ourselves, published by William Morrow in 1994. He is an accomplished poet, having appeared in a variety of notable journals and anthologies, including Poetry, The Antioch Review, The Columbia Review, The Hiram Poetry Review, and the Norton Anthology of Light Verse. He has been a daily newspaper reporter and editor for over 20 years. He teaches at the University of Massachusetts in Dartmouth and Bristol Community College in Fall River, Massachusetts.