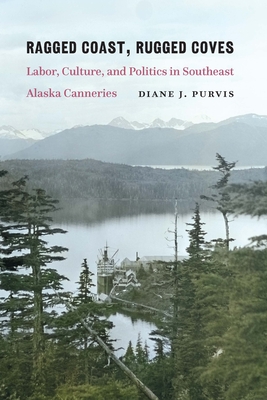 
Usually Arrives in Store in 1-5 Days
Ragged Coast, Rugged Coves explores the untold story of cannery workers in Southeast Alaska from 1878, when the first cannery was erected on the Alexander Archipelago, through the Cold War. The cannery jobs brought waves of immigrants, starting with Chinese, followed by Japanese, and then Filipino nationals. Working alongside these men were Alaska Native women, trained from childhood in processing salmon. Because of their expertise, these women remained the mainstay of employment in these fish factories for decades while their husbands or brothers fished, often for the same company.

Canned salmon was territorial Alaska’s most important industry. The tax revenue, though meager, kept the local government running, and as corporate wealth grew, it did not take long for a mix of socioeconomic factors and politics to affect every aspect of the lands, waters, and population. During this time the workers formed a bond and shared their experiences, troubles, and joys. Alaska Natives and Chinese, Japanese, and Filipino immigrants brought elements from their ethnic heritage into the mix, creating a cannery culture.

Although the labor was difficult and frequently unsafe, the cannery workers and fishermen were not victims. When they saw injustice, they acted on the threat. In the process, the Tlingits and Haidas, clans of Southeast Alaska for more than ten thousand years, aligned their interests with Filipino activists and the union movement. Ragged Coast, Rugged Coves tells the powerful story of diverse peoples uniting to triumph over adversity.

Diane J. Purvis taught cultural history at Alaska Pacific University for twenty-five years. She is the author of The Drive of Civilization: The Stikine Forest versus Americanism.

“Ragged Coast, Rugged Coves demonstrates that indigenous peoples in Alaska engaged capitalism and colonialism on several levels and were not simply overwhelmed by them. Alaskan workers built alliances that had an important impact on and legacy for Southeast Alaska—a history that deserves to be remembered.”—Chris Friday, author of Organizing Asian-American Labor: The Pacific Coast Canned-Salmon Industry, 1870–1942

“Ragged Coast, Rugged Coves paints a picture of an Alaska with a racially diversified population . . . and offers a refreshing view of women in the workplace and in labor organizing. This book is really a fascinating narrative, and it fills an important niche in the history of Alaska, the fishing and canning industries in the West, and the labor movement.”—Roberta Ulrich, author of Empty Nets: Indians, Dams, and the Columbia River