Playing the Devil (A Bridge to Death Mystery #2) (Paperback) 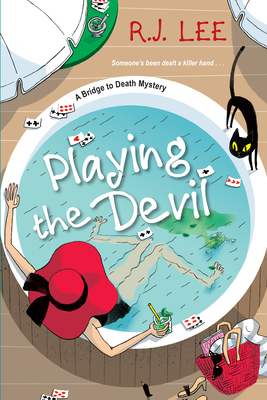 Playing the Devil (A Bridge to Death Mystery #2) (Paperback)

Backordered -- Email or Call for Availability
(This book cannot be returned.)

This is book number 2 in the A Bridge to Death Mystery series.

Reporter and bridge player Wendy Winchester once again plays ace detective when a country club member is murdered in a hot tub . . .

Now an investigative reporter for the Rosalie Citizen in the Mississippi River port of Rosalie, Wendy still likes to unwind over a game of cards. Following the demise of the Rosalie Bridge Club, she's started her own group at the Rosalie Country Club. During the first meeting of the Country Club Bridge Players, the dummy has barely been laid down when another dummy gets in a scuffle at the bar across the room. Bridge player Carly Ogle's husband Brent is at it again.

After the club's new female golf pro breaks up the fight, Brent storms off to soak in a hot tub. But Carly soon finds the bullying Brent dead in the water, clubbed over the head with the pestle the barkeep uses to crush leaves for mint juleps.

Racist, sexist, homophobic, and an all-around lout, Brent made enough enemies to fill a bridge tournament. So Wendy has to play her cards right to get the story—and stay out of hot water long enough to put the squeeze on the killer . . .
R. J. Lee follows in the mystery-writing footsteps of his father, R. Keene Lee, who wrote fighter pilot and detective stories for Fiction House, publishers of WINGS Magazine and other pulp fiction periodicals in the late ’40s and ’50s. Lee was born and grew up in the Mississippi River port of Natchez but also spent thirty years living in the Crescent City of New Orleans. A graduate of the University of the South (Sewanee) where he studied creative writing under Sewanee Review editor, Andrew Lytle, Lee now resides in Oxford, Mississippi.