Return to Guntown: Classic Trials of the Outlaws and Rogues of Faulkner Country (Hardcover) 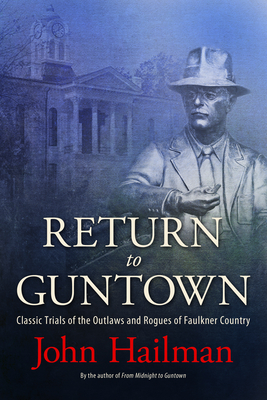 Return to Guntown: Classic Trials of the Outlaws and Rogues of Faulkner Country (Hardcover)

By Estate Of John Hailman


On Our Shelves Now
A federal prosecutor in Mississippi for over thirty years, John Hailman routinely worked with federal agents, lawyers, judges, and criminals of every type imaginable. Encouraged by the acclaim for his earlier book, From Midnight to Guntown, he has opened even more of the astonishing cases within the over thirty-five boxes full of trial stories he carried into retirement. Hailman gathers colorful exploits of eccentric modern criminals from William Faulkner's Mississippi, where savvy victims often outwit their criminal perpetrators. Characters range from rich but incompetent drug lords and nationwide gun-runners to bumbling Dixie Mafia kidnappers. The book ends with "Fancy Frauds" in which ingenious con men (and women) offer hilarious but surprisingly sophisticated "special deals" on tax-free gold mines in Mexico and bargain (but bogus) Viagra. Chapters include "Guns, Bombs, and Moonshine Whiskey," "Drug Kingpins Have Troubles Too," "Crime Victims Fight Back," "Mere Theft," and "Fancy Frauds." Written to entertain and enlighten, these stories will delight any fan of the true crime genre and anyone who enjoys good writing and the skill of a master storyteller.
John Hailman (1942-2021) was a retired federal prosecutor from the US attorney's office in Oxford, Mississippi. He was an inaugural Overby Fellow in Journalism and an adjunct professor of law at the University of Mississippi. He is author of several books, including Foreign Missions of an American Prosecutor: From Moscow to Morocco and Paris to the Persian Gulf; Thomas Jefferson on Wine; From Midnight to Guntown: True Crime Stories from a Federal Prosecutor in Mississippi; and The Search for Good Wine: From the Founding Fathers to the Modern Table, all published by University Press of Mississippi.