Uniting Mississippi: Democracy and Leadership in the South (Paperback) 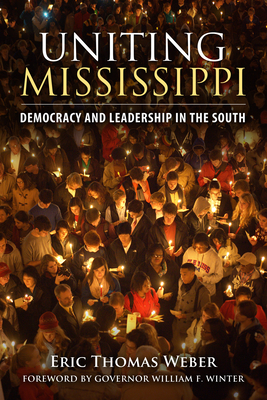 Uniting Mississippi: Democracy and Leadership in the South (Paperback)


On Our Shelves Now
Uniting Mississippi applies a new, philosophically informed theory of democratic leadership to Mississippi's challenges. Governor William F. Winter has written a foreword for the book, supporting its proposals. The book begins with an examination of Mississippi's apparent Catch-22, namely the difficulty of addressing problems of poverty without fixing issues in education first, and vice versa. These difficulties can be overcome if we look at their common roots, argues Eric Thomas Weber, and if we practice virtuous democratic leadership. Since the approach to addressing poverty has for so long been unsuccessful, Weber reframes the problem. The challenges of educational failure reveal the extent to which there is a caste system of schooling. Certain groups of people are trapped in schools that are underfunded and failing. The ideals of democracy reject hierarchies of citizenship, and thus, the author contends, these ideals are truly tested in Mississippi. Weber offers theories of effective leadership in general and of democratic leadership in particular to show how Mississippi's challenges could be addressed with the guidance of common values. The book draws on insights from classical and contemporary philosophical outlooks on leadership, which highlight four key social virtues: wisdom, courage, moderation, and justice. Within this framework, the author approaches Mississippi's problems of poverty and educational frustration in a novel way that is applicable in and beyond the rural South. Weber brings to bear each of the virtues of democratic leadership on particular problems, with some overarching lessons and values to advance. The author's editorial essays are included in the appendix as examples of engaging in public inquiry for the sake of democratic leadership.
Eric Thomas Weber is associate professor of public policy leadership at the University of Mississippi and the recipient of the Mississippi Humanities Council's 2015 Public Scholar Award. He serves as executive director of the Society of Philosophers in America and is the author of three books, including Democracy and Leadership: On Pragmatism and Virtue.