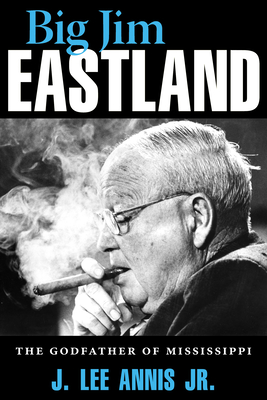 By J. Lee Annis
Email or call for price
Special Order -- Email or Call for Availability

For decades after the Second World War, Senator James O. Eastland (1904-1986) was one of the more intransigent leaders of the Deep South's resistance to what he called "the Second Reconstruction." And yet he developed, late in his life, a very real friendship with state NAACP chair Aaron Henry. Big Jim Eastland provides the life story of this savvy, unpredictable powerhouse. From 1947 to 1978, Eastland wore that image of resistance proudly, even while recognizing from the beginning his was the losing side. Biographer J. Lee Annis Jr. chronicles such complexities extensively and also delves into many facets lesser known to the general public. Born in the Mississippi Delta as part of the elite planter class, Eastland was appointed to the US Senate in 1941 by Democratic Governor Paul B. Johnson Sr. Eastland ran for and won the Senate seat outright in 1942 and served in the Senate from 1943 until his retirement in 1978. A blunt man of few words but many contradictions, Eastland was an important player in Washington, from his initial stint in 1941 where he rapidly salvaged several key local projects from bungling intervention, to the 1970s when he shepherded the Supreme Court nominees of Richard Nixon and Gerald Ford to Senate confirmation. Annis paints a full picture of the man, describing the objections Eastland raised to civil rights proposals and the eventual accommodations he needed to accept after the passage of the Voting Rights Act of 1965.

J. Lee Annis Jr. has taught history at Montgomery College for the past thirty years, and he is currently chairman of the History and Political Science Department at the Rockville campus. He is author of Howard Baker: Conciliator in an Age of Crisis, and, with Senator William H. Frist, coauthor of Tennessee Senators, 1911-2001: Portraits of Leadership in a Century of Change.