A Thousand Cuts: The Bizarre Underground World of Collectors and Dealers Who Saved the Movies (Hardcover) 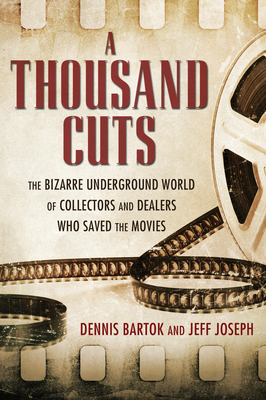 A Thousand Cuts: The Bizarre Underground World of Collectors and Dealers Who Saved the Movies (Hardcover)

A Thousand Cuts is a candid exploration of one of America's strangest and most quickly vanishing subcultures. It is about the death of physical film in the digital era and about a paranoid, secretive, eccentric, and sometimes obsessive group of film-mad collectors who made movies and their projection a private religion in the time before DVDs and Blu-rays.

Authors Dennis Bartok and Jeff Joseph examine one of the least-known episodes in modern legal history: the FBI's and Justice Department's campaign to harass, intimidate, and arrest film dealers and collectors in the early 1970s. Many of those persecuted were gay men. Victims included Planet of the Apes star Roddy McDowall, who was arrested in 1974 for film collecting and forced to name names of fellow collectors, including Rock Hudson and Mel Torm .

A Thousand Cuts explores the obsessions of the colorful individuals who created their own screening rooms, spent vast sums, negotiated underground networks, and even risked legal jeopardy to pursue their passion for real, physical film.

Dennis Bartok is a filmmaker, a screenwriter, and the head of distribution for art-house distributor Cinelicious Pics. He was formerly head of programming for the American Cinematheque's Egyptian Theatre in Hollywood. Jeff Joseph is a motion picture archivist and was formerly one of the best-known film dealers in the United States. Jeff and his wife Lauren were the owners of SabuCat Productions. He is currently working with the UCLA Film and TV Archive in restoring the Hal Roach/Laurel and Hardy library.