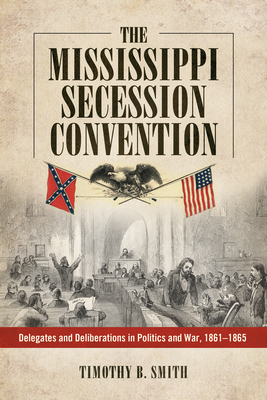 By Timothy B. Smith

The Mississippi Secession Convention is the first full treatment of any secession convention to date. Studying the Mississippi convention of 1861 offers insight into how and why southern states seceded and the effects of such a breech. Based largely on primary sources, this book provides a unique insight into the broader secession movement.

There was more to the secession convention than the mere act of leaving the Union, which was done only three days into the deliberations. The rest of the three-week January 1861 meeting as well as an additional week in March saw the delegates debate and pass a number of important ordinances that for a time governed the state. As seen through the eyes of the delegates themselves, with rich research into each member, this book provides a compelling overview of the entire proceeding.

The effects of the convention gain the most analysis in this study, including the political processes that, after the momentous vote, morphed into unlikely alliances. Those on opposite ends of the secession question quickly formed new political allegiances in a predominantly Confederate-minded convention. These new political factions formed largely over the issues of central versus local authority, which quickly played into Confederate versus state issues during the Civil War. In addition, author Timothy B. Smith considers the lasting consequences of defeat, looking into the effect secession and war had on the delegates themselves and, by extension, their state, Mississippi.