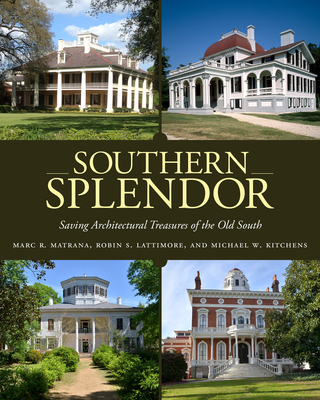 
On Our Shelves Now
Few things evoke thoughts and memories of the past more than a house from a bygone era, and few places are identified and symbolized more by historic dwellings than the American South. Plantation houses built with columned porticos and wide porches, stout chimneys, large rooms, and sweeping staircases survive as legacies of both a storied and troubled past. These homes are at the heart of a complex web of human relationships that have shaped the social and cultural heritage of the region for generations. Despite their commanding appearance, the region's plantation houses have proven to be fragile relics of history, vulnerable to decay, neglect, and loss. Today, only a small percentage of the South's antebellum treasures survive. In Southern Splendor: Saving Architectural Treasures of the Old South, historians Marc R. Matrana, Robin S. Lattimore, and Michael W. Kitchens explore almost fifty houses built before the Civil War that have been authentically restored or preserved. Methodically examined are restoration efforts that preserve not only homes and other structures, but also the stories of those living in or occupying those homes. The authors discuss the challenges facing specific plantation homes and their preservation. Featuring over 275 stunning photographs, as well as dozens of firsthand accounts and interviews with those involved in the preservation of these historic properties, Southern Splendor describes the leading role the South has played, since the nineteenth century, in the historic preservation movement in this country.
Marc R. Matrana practices medicine at Ochsner Medical Center and is an active preservationist and historian. He is author of Lost Plantation: The Rise and Fall of Seven Oaks and Lost Plantations of the South, both published by University Press of Mississippi. Robin S. Lattimore is a high school teacher and author of more than twenty-five books, including Southern Plantations: The South's Grandest Homes. In 2013 he was bestowed with North Carolina's Order of the Longleaf Pine. Michael W. Kitchens practices law in Athens, Georgia, where he is involved in preservation efforts. He is author of Ghosts of Grandeur: Georgia's Lost Antebellum Homes and Plantations, the 2013 Gold Medal Winner of the Benjamin Franklin Award for Best New Voice in Nonfiction.